The Ashuapmushuan River is a river in the Saguenay–Lac-Saint-Jean region of the Canadian provinces of Quebec. It starts at the outlet of Lake Ashuapmushuan, and flows first in a north-easterly direction for about 30 kilometres (19 mi) whereafter it continues south-east to Saint-Félicien. There it drains into Lac Saint-Jean of which it is the third largest tributary after the Peribonka and Mistassini Rivers. The river is 181 kilometres (112 mi) long but its source is 266 kilometres (165 mi) from its mouth.

The Ashuapmushuan River forms the northern boundary of the Ashuapmushuan Wildlife Reserve for most of its length. As a wild undeveloped river, and accessible from Quebec Route 167 close to Lake Ashuapmushuan, it is a popular destination for canoe camping.

A new 276.6-square-kilometre (106.8 sq mi) aquatic reserve is being considered that would protect 126 kilometres (78 mi) of the Ashuapmushuan River, including its floodplain and valley slopes. The reserve prohibits logging, mining, and hydro-electric development, while protecting critical landlocked salmon habitats, biodiversity, and sites of archaeological interest.

The name Ashuapmushuan, which was not officially adopted until 1982, is an Innu word meaning "place where one lies in wait for moose".

The river was however first called Necouba by Louis Jolliet in 1679. This name was also used by Jean-Baptiste-Louis Franquelin and Guillaume Delisle in 1686 and 1703 respectively. But in 1732 surveyor Normandin considered this an error, who referred to the Necoubeau as a tributary to Lake Ashuapmushuan that was called Lake Chomonchouane by Laure on his maps of 1731 and 1732. Therefore, Normandin renamed the river to Chomontchouane. In 1917, the Commission de géographie officially adopted the modernized spelling of Chamouchouane. 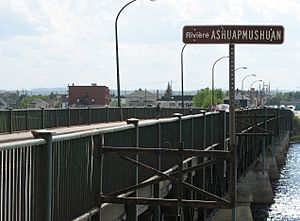 The Ashuapmushuan basin is part of the Central Laurentians in the natural region of the Lake Manouane Depression. The river is enclosed in narrow valleys for a large part of its course, with powerful rapids and a dozen waterfalls, of which the most impressive are the Chaudière Falls.

Intermediate course of the Ashuapmushuan river (upstream of the Chigoubiche river) (segment of 50 km (31 mi); drop in height of 91 m (299 ft))

Municipal territories crossed by the river

Starting from the upstream (Ashuapmushuan Lake), the course of the Ashuapmushuan river descends, crossing the following municipal territories: 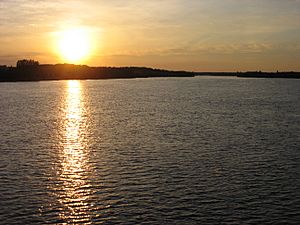 Sunset over the Ashuapmushuan River at Saint-Félicien

The Ashuapmushuan River Basin is home to several archaeological sites that show that indigenous people occupied the area for thousands of years. European explorers and missionaries came in the 17th century. For instance, Charles Albanel used the river for his voyage to Hudson Bay in 1672.

In 1685, French fur traders set up a trading post on the eastern shore of Lake Ashuapmushuan that remained almost continuously in operation until the middle of the 19th century. It successively came under control of the Traite de Tadoussac (French period), King's Posts (English period), the North West Company (1802), and the Hudson's Bay Company (1821). During this period, the river became a major link in the fur trade route from Tadoussac to Hudson Bay since its source is just east of Lake Mistassini on the Rupert River. The vestiges of the post are considered some of the most valuable and best preserved relics from the era.

After the fur trade, the Ashuapmushuan River was used by logging companies to drive logs downstream.

The Ashuapmushuan River and its tributaries provide spawning grounds and habitats for landlocked salmon (Salmo salar ouananiche). Newly hatched salmon remain in the river for 2 to 4 years before migrating to Lake Saint-Jean where it remains for most of its adult life. Then, at age 4 to 8, it will return to the river to spawn. While the Ashuapmushuan River has significantly contributed to salmon production for the lake, the salmon population has seen a sharp decline in the 1990s. Despite conservation measures, its status remains of concern.

All content from Kiddle encyclopedia articles (including the article images and facts) can be freely used under Attribution-ShareAlike license, unless stated otherwise. Cite this article:
Ashuapmushuan River Facts for Kids. Kiddle Encyclopedia.