Martin Luther King, Jr., a prominent American leader of the civil rights movement and Nobel Peace Prize winner, was fatally shot at the Lorraine Motel in Memphis, Tennessee, on April 4, 1968, at the age of 39. King was rushed to St. Joseph's Hospital, where he died at 7:05 that evening. He was a prominent leader of the African-American Civil Rights Movement who was known for his use of nonviolence and civil disobedience.

James Earl Ray, a fugitive from the Missouri State Penitentiary, was arrested and charged with King's murder. He was sentenced to 99 years in the Tennessee State Penitentiary. He died in prison at the age of 70.

The King family and others believe that a United States government conspiracy killed King, as Loyd Jowers said in 1993. They believe that Ray was a scapegoat. In 1999, the King family filed a wrongful death lawsuit against Jowers for $10,000,000. During the trial, both the King family and Jowers gave evidence accusing the government of a conspiracy. The government agencies that were accused could not defend themselves or respond, because they were not named as defendants. Based on the evidence, the jury concluded that Jowers and "others were part of a conspiracy to kill King."

King had clearly made enemies in his rise to fame. The Ku Klux Klan did what they could to hurt his reputation, especially in the South. Even the FBI kept a close eye on him.

On the evening of April 4, 1968, King was standing on the balcony of his motel room in Memphis, Tennessee. He was planning to lead a protest march to support garbage workers that were on strike. At 6:01 p.m., King was shot. 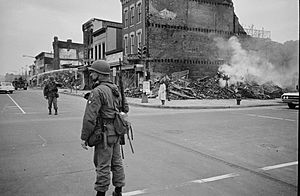 Photo from after the riots in Washington, D.C., following King's murder

Civil disorder, including riots, happened after King's murder in at least 110 U.S. cities. Washington, Chicago, and Baltimore had the most damage.

On June 10, 1968, James Earl Ray was arrested in London at Heathrow Airport. Ray was extradited to the United States and charged with killing King. On March 10, 1969, Ray told the court he was guilty, and was sentenced to 99 years in the Tennessee state penitentiary. Ray later tried many times to take away his guilty plea and be tried by a jury, but he was unsuccessful. 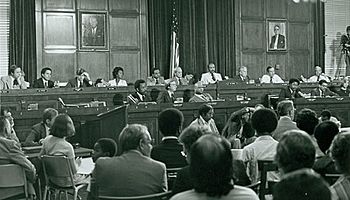 Meeting of the House Select Committee on Assassinations

The United States House of Representatives Select Committee on Assassinations was created in 1976 to look into the assassinations of John F. Kennedy and Martin Luther King, Jr., and the shooting of Governor George Wallace. The Committee investigated until 1978, and put out a final report in 1979. About the King assassination, the Committee decided:

In 1999, Coretta Scott King, King's widow, and the rest of King's family won their wrongful death lawsuit against Loyd Jowers and "other unknown co-conspirators" (other people who were part of the conspiracy). Jowers claimed to have received $100,000 to arrange King's assassination. The jury of six whites and six blacks found Jowers liable for King's murder. They also found that governmental agencies were part of the assassination plot.

In 2000, the Department of Justice completed the investigation about Jowers' claims. They did not find evidence to support the accusations about conspiracy. The investigation report recommends no more investigation unless some reliable new facts are presented.

The Lorraine Motel is now a civil rights museum.

All content from Kiddle encyclopedia articles (including the article images and facts) can be freely used under Attribution-ShareAlike license, unless stated otherwise. Cite this article:
Assassination of Martin Luther King, Jr. Facts for Kids. Kiddle Encyclopedia.