Kids Encyclopedia Facts
This page is about the village in New York. For other uses, see Athens (disambiguation).

Athens is a village in Greene County, New York, United States. The population was 1,668 at the 2010 census. The village is named after the classical city of Athens. It is in the eastern part of the town of Athens, across the Hudson River from the city of Hudson.

The history of the village and historic sites worth preservation are detailed in a New York State study, "Village of Athens Multiple Resource Area".

Historic sites in Athens listed on the National Register of Historic Places in or near the village include:

The land was purchased from the natives in 1665. The community was once called "Loonenburgh" and "Esperanza." The village was incorporated in 1805.

In the late 1830s, Athens had a horse-powered ferry, or "team boat" built for crossing the Hudson. "This was a single hull vessel of the treadmill type requiring six horses for power. The treadmills, on either side, were each trod by three horses always facing in the same direction. To reverse the paddlewheels it was only necessary to stop the horses a minute, and withdraw a drop pin that would reverse the gearing."

The 1935 completion of the Rip Van Winkle Bridge several miles to the south put an end to the local ferry service across the Hudson, until the summer of 2012 when weekend ferry service resumed. However, the ferry is portrayed in the 2005 film War of the Worlds, when Martian tripods attack the town, the ferry, and refugees from New York City attempting to flee across the Hudson. 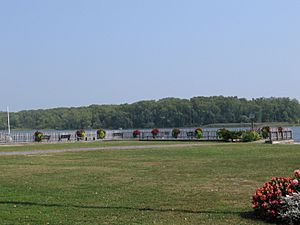 There were 687 households, out of which 29.5% had children under the age of 18 living with them, 48.8% were married couples living together, 11.2% had a female householder with no husband present, and 34.4% were non-families. 29.7% of all households were made up of individuals, and 17.5% had someone living alone who was 65 years of age or older. The average household size was 2.44 and the average family size was 3.01.

All content from Kiddle encyclopedia articles (including the article images and facts) can be freely used under Attribution-ShareAlike license, unless stated otherwise. Cite this article:
Athens (village), New York Facts for Kids. Kiddle Encyclopedia.