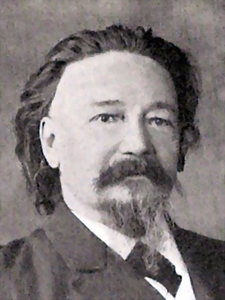 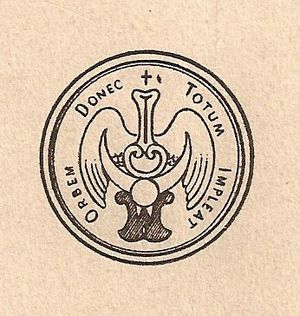 Seal of the Cosmosophic Movement

August Vandekerkhove (15 October 1838 Kanegem - 24 March 1923 Mâcon) was a Belgian writer, playwright, poet, painter and inventor. He wrote under the pseudonym S.U. Zanne. Vandekerkhove started a movement he called Cosmosofie (Cosmosophy). He said that Cosmosophy was the opposite of Theosophy. When he was young he wrote a novel and three plays. His literary work was inspired by ethics and psychology. Later he moved to Scotland, the USA and France.

In France he wrote works on kabala, esotericism and the occult. He was one of the first writers talking about subjects like feminism and the Age of Aquarius. Each year on Palm Sunday at 5 PM, at the cemetery of Flacé in Mâcon in France, people come together to remember him.

Private editions for his disciples at less than 30 copies

All content from Kiddle encyclopedia articles (including the article images and facts) can be freely used under Attribution-ShareAlike license, unless stated otherwise. Cite this article:
August Vandekerkhove Facts for Kids. Kiddle Encyclopedia.