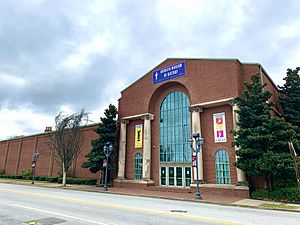 The Augusta Museum of History is a history museum located in Augusta, Georgia, U.S.. The museum was founded in 1937 to preserve and share the history of Augusta and its surrounding area. On display are numerous artifacts, images, and dioramas that showcase the broad spectrum of the region’s history. The Museum of History is the only Museum in the CSRA (Central Savannah River Area - includes four counties in Georgia: Burke, Columbia, McDuffie and Richmond and two counties in South Carolina - Aiken and Edgefield) accredited by the American Alliance of Museums.

All content from Kiddle encyclopedia articles (including the article images and facts) can be freely used under Attribution-ShareAlike license, unless stated otherwise. Cite this article:
Augusta Museum of History Facts for Kids. Kiddle Encyclopedia.