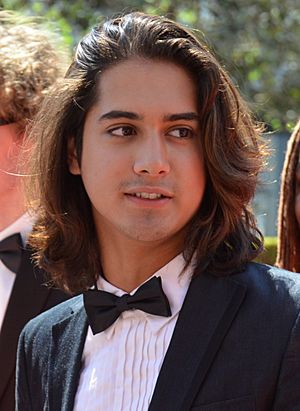 Avan Jogia (born February 9, 1992 in Vancouver, British Columbia) is a Canadian actor. He is best known for his role as Beck Oliver in Victorious.

Jogia was born in Vancouver, British Columbia. He also grew up there. He is of Indian and European descent. His father was born in London and comes from India. His mother has Irish, Welsh and French ancestry.

In his youth, Jogia lived in Canada, Germany and England. He went to different schools in Vancouver like the Killarney Secondary School and the King George Secondary School. He got also private education. In the 10th class, he left the school to concentrate on his acting career.

He began his career in 2006 as Danny Araujo in the film A Girl Like Me: The Gwen Araujo Story. In 2007 he had small roles in the series Aliens in America. He played in the film Gym Teacher: The Movie in 2008 and on the Nickelodeon television movie Spectacular! in 2009.

From 2010-2013 he played on the Nickelodeon television series Victorious as Beck Oliver. In October 2012 he got the main role on the ABC Family series Twisted. It started in March 2013

Since March 2012 are Jogia and Zoey Deutch a pair.

All content from Kiddle encyclopedia articles (including the article images and facts) can be freely used under Attribution-ShareAlike license, unless stated otherwise. Cite this article:
Avan Jogia Facts for Kids. Kiddle Encyclopedia.