Avoca Beach is a coastal suburb of the Central Coast region of New South Wales, Australia, about 95 kilometres (59 mi) north of Sydney. Avoca Beach is primarily a residential suburb, which is now often considered part of the Greater Sydney area, but also a popular tourist destination. Avoca Beach village has a variety of restaurants and cafes as well as a post office, newsagent, pharmacy and mini-mart. Avoca Beach also has a historic cinema, a hotel, bowling club, motel and caravan park. It is located within the Central Coast Council local government area.

This suburb is unrelated to the NSW Southern Highlands suburb of Avoca, New South Wales, except in name only.

Avoca Beach is located on the Tasman Sea 17 kilometres (11 mi) east-southeast of the Gosford central business district, and about halfway between Newcastle and Sydney, being about 95 kilometres (59 mi) from each. It is bordered to the north by the Bulbararing Lagoon, to the west by Saltwater Creek and to the east by the ocean.

The area was originally inhabited by the Awabakal Aboriginal people. "Avoca" is an Irish name meaning "great estuary" or "where the river meets the sea", and is also the name of a town in County Wicklow, Ireland.

On 4 January 1830, 640 acres (259 ha) of land in the area were promised to Irish army officer John Moore. However, the official deeds were not issued until 30 September 1839, due to the difficulty in surveying the land. He built a house opposite Bulbararing Lake (now known as Avoca Lake) and planted vines, cereals and fruit trees. He left the area in 1857 for the Victorian goldfields. In the late 19th century, Tom Davis leased the area in order to exploit local timber, which was transported by tram to a mill at Terrigal via what is now Tramway Road in North Avoca. 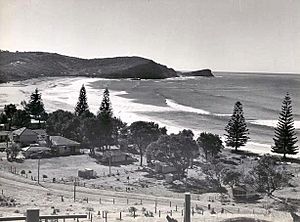 Residential development in Avoca Beach began during the 20th century, and the area subsequently became a popular holiday retreat with wealthy residents of Sydney's North Shore.

A rich history exists in the community groups in this small village with the Avoca Beach Rural Fire Brigade operating since the 1940s, Avoca Beach Surf Life Saving Club (1929) and the 1st Avoca Beach Surf Cub Scouts being very active in the area.

In February 2010, following the proposal to scuttle the frigate HMAS Adelaide off the beach as a dive wreck in late March, a resident action group was formed to protest against this.

Avoca Beach residents had a median age of 41, compared with the median of 42 for the Central Coast local government area. Median individual incomes in Avoca Beach were above average for the region — $764 per week compared with $600 per week. The 2016 Census reported 1,527 occupied private dwellings, of which 83.3% were separate houses, and the median monthly housing loan repayment of $2,167 was well above the regional average of $1,750.

In 2020, Avoca Beach's median house price was $1,150,000 versus $940,000 for the Central Coast region. In 2008, Avoca Beach was listed as the fourth most expensive place to live in New South Wales, and the sixteenth most expensive in Australia, based on the sale of units that year.

Avoca Beach has a state primary school, which first opened in 1935. The suburb is within Kincumber High School's catchment area.

All content from Kiddle encyclopedia articles (including the article images and facts) can be freely used under Attribution-ShareAlike license, unless stated otherwise. Cite this article:
Avoca Beach, New South Wales Facts for Kids. Kiddle Encyclopedia.