Kids Encyclopedia Facts
This page is about the town in County Wicklow. For other uses, see Avoca (disambiguation). For the mountain glen in Ireland, see River Avoca.

Avoca (Irish: Abhóca, formerly Abhainn Mhór, meaning the great river) is a small town near Arklow, in County Wicklow, Ireland. It is situated on the River Avoca.

The Avoca area has been associated with its copper mines for many years and the valley has been celebrated by Thomas Moore in the song "The Meeting of the Waters". The name of the song derives from the meeting of the Avonmore and Avonbeg rivers, about 3 kilometres from the village of Avoca. The song is said to have been written under a tree, the stump of which remains by the Meetings. Avoca is also famous for its handweaving, with Avoca Handweavers based there.

Avoca has been used as a filming location for several films and television series. The BBC series Ballykissangel was filmed there. In 1967, Avoca was one of the locations used in the film Jules Verne's Rocket to the Moon, and it was the setting for the comedy film Zonad which had a general Irish release in 2010.

The red kite, recently reintroduced to Ireland, is now commonly seen in and around Avoca.

Copper mining is reported to have begun in the Avoca River valley around 1720 and it continued, with interruptions, until 1982. Earlier mining, perhaps dating back to the Bronze Age, may have occurred. The East Avoca site, today, is composed mainly of a number of rock waste spoil heaps, abandoned quarries (Cronebane and East Avoca open pits) and disused roads. The largest spoil heap, Mount Platt, was built up from waste rock excavated from Cronebane open pit. There was a mineral tramway built from the West Avoca mines, through the village (on the opposite side of the river) and on to Arklow Harbour. The route of most of this was subsumed into the Dublin-Rosslare railway line, but an arch and a tunnel under the road from Rathdrum to Avoca remains. 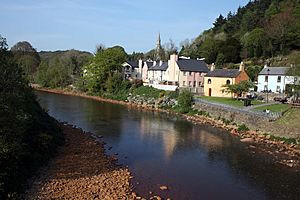 Avoca lies on the R752 regional road linking Rathnew with Woodenbridge. The village is served by Bus Éireann route 133 from Dublin (66 km) and Wicklow (21 km) to Arklow (10 km), with two departures in each direction on Mondays to Saturdays and one each way on Sundays.

There is some local political pressure to secure reopening of Avoca railway station, from which passenger services were withdrawn on 3 March 1964, almost 101 years after its opening, on the Dublin-Rosslare railway line, on 18 July 1863.

Avoca has town twinning agreements with:

All content from Kiddle encyclopedia articles (including the article images and facts) can be freely used under Attribution-ShareAlike license, unless stated otherwise. Cite this article:
Avoca, County Wicklow Facts for Kids. Kiddle Encyclopedia.