Backus Creek State Game Area is centrally located within Roscommon County in the north-central portion of the Lower Peninsula. The area contains three dams and receives its water source from Backus Creek, which itself flows into the Cut River and eventually to Houghton Lake. The state game area is mostly surrounded by undeveloped state forest lands, which are part of the Roscommon section of the Au Sable State Forest. Only a small portion along the western boundary consists of private property.

It is accessible by several unmaintained dirt roads, with the main entrance being Backus Creek Road off M-18 (North Roscommon Road). Interstate 75 (I-75) forms the northeastern boundary of the state game area. M-55 and M-157 are to the south but not within the area's boundaries. The state game area's headquarters are located at the Roscommon DNR Service Center and Wildlife Office at 8717 North Roscommon Road to the north at exit 239 off I-75 (M-18 and BL I-75). The nearest sizable communities include Prudenville and Houghton Lake to the southwest and St. Helen to the northeast. The village of Roscommon is located 10 miles (16 km) to the north, and West Branch is the nearest incorporated city 20 miles (32 km) to the east.

Located four miles (6.4 km) to the south, the Denton Creek Flooding State Wildlife Management Area is the next nearest unit managed by the Michigan Department of Natural Resources. Backus Creek State Game Area is one of 12 state game and wildlife areas located within Roscommon County.

Prior to state ownership, the land was under single private ownership. The Backus Lake Dam was first constructed in 1937 and created the artificial wetlands.

The surrounding land was purchased by the state of Michigan through a grant allocated by the Pittman–Robertson Federal Aid in Wildlife Restoration Act. The state game area was dedicated on October 13, 1954. Soon after its establishment, two additional dams were constructed in 1956 to expand the artificial wetlands to enhance the recreational area. In 2008, the state game area was expanded to include the southern Backus Lake Flooding near the original dam, which made the total area approximately 4,379 acres (1,772 ha; 6.842 sq mi).

All three dams receive annual maintenance, and in 2019, the Backus Lake Dam and Backus Creek Dam were disabled to provide extensive reconstruction, while the Little Mud Dam remains operational. The water levels within the state game area were significantly reduced, as the two disabled dams have lowered the water level to the natural flow of Backus Creek. The two dams and their dikes will be strengthened to provide better water level control. The project was completed by late 2020, in which water levels in the reservoirs will slowly be restored. The state game area has remained opened during this project, although normal hunting and fishing activities are greatly reduced. 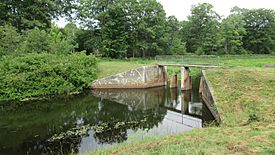 Fishing is also a popular activity but is not a main focus for development of the state game area. The water levels within Backus Creek and flooded areas can vary greatly depending on the time of the year and rainfall amounts. There are two rustic boat launches only suitable for kayaks and smaller canoes. Camping is permitted, although there are no designated camping locations. Hiking, birdwatching, and geocaching are also secondary activities within the state game area.

All content from Kiddle encyclopedia articles (including the article images and facts) can be freely used under Attribution-ShareAlike license, unless stated otherwise. Cite this article:
Backus Creek State Game Area Facts for Kids. Kiddle Encyclopedia.