Bald Hill, located in the hamlet of Farmingville, New York, part of the Town of Brookhaven, is one of the highest areas of elevation on Long Island. The highest elevation in the Bald Hill area is 331 feet (101 m). Though local residents often claim it to be the highest point on Long Island, that honor actually belongs to Jayne's Hill in the Town of Huntington at 401 feet (122 m). Also, nearby Telescope Hill, about 0.8 miles (1.3 km) WSW, is slightly higher at 334 feet (102 m). Bald Hill in Brookhaven should also not be confused with Bald Hill in Riverhead.

The Bald Hill area is part of the Ronkonkoma Moraine, which runs east to west along the center of the Town of Brookhaven, and marks where the glacier which formed Long Island stopped its advance. When first settled in the late 18th century, the area was called "Bald Hills." While the elevation and views are impressive for Long Island, George Washington found the hills to be merely "trifling" when he passed through in April 1790.

In 1897, the cross-Island Bicycle Path was opened and passed through the Bald Hill area.

In 1970-71, Patchogue-Mt. Sinai Road (County Route 83) was built through the Bald Hill area. Two overlooks were constructed in a widened median area with automobile access, and stone markers were placed for "Danger Hill" and "Breakneck Hill", the names given to the two hills by early settlers. A Vietnam Veterans memorial was opened on the southern lookout side in 1991 (elevation 321 feet).

The Brookhaven Town Hall and Sachem East High School are on the east side of the hill. The Glacier Ridge Preserve to the north of the structures has a network of 11 miles (18 km) of cross country bicycle trails. 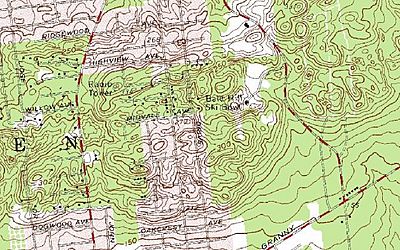 The seeds for this project were planted in 1964, when Suffolk County builder Henry Taca approached the Town with plans to build houses on his 229 acres (0.93 km2) in the area, including the hilly Bald Hill tract. He turned over 64 acres (260,000 m2) of the Bald Hill property to the Town free of charge in 1965, and in return, he received Town approval for a "cluster housing" project known as Hawthorne Estates. Under the approval, he was allowed to build more houses on his remaining acreage than would otherwise be permitted.

In 1975, The New York Times reported that the ski area was drawing 5,000 visitors each week. The facility was described as covering 106 acres (0.43 km2) and featuring a 1,400-foot (430 m) run for advanced skiers, a slope for "novices", and a "bunny run" for beginners. The cost for an all-day ticket was $2.25. All was not rosy, however. New "quiet" snow machines were in the process of being installed to quell complaints about noise from neighboring residents, and some members of the Town Board were complaining that the facility was costing too much and should perhaps be closed. Operating costs were reported to be $500,000 annually, with revenue of between $100,000 to $200,000, depending on the amount of snowfall.

Fortunes turned briefly for the better in the winter of 1976-1977, when generous snowfall (over 62 inches (1,600 mm) in Suffolk County) gave the Ski Bowl its first profitable year. But the warmer winter of 1979-80 proved to be a death blow. As of late January 1980, the ski bowl had only been open eight days for the season. Only 6,500 skiers showed up that winter, only 11 inches (280 mm) of snow fell, and revenues fell to $18,000. As the next winter approached, the Town searched for a private operator willing to take over the facility, an unlikely prospect in light of Long Island's weather and the site's historical unprofitability. With the facility's budget slashed by over 70%, and a vague plan to open only if natural snowfall was sufficient, Bald Hill's days as Long Island's largest public skiing facility were at an end.

The ski bowl site is now home of the Brookhaven Amphitheater. The ski lodge building remains as an art gallery, and sits to the right of the audience as they face the stage.

All content from Kiddle encyclopedia articles (including the article images and facts) can be freely used under Attribution-ShareAlike license, unless stated otherwise. Cite this article:
Bald Hill (Farmingville, New York) Facts for Kids. Kiddle Encyclopedia.