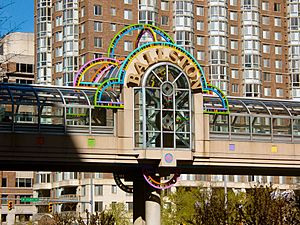 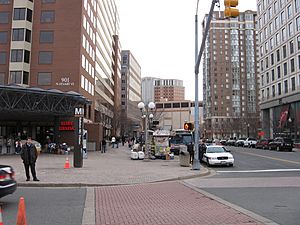 Ballston is a neighborhood in Arlington County, Virginia and is home to the Ballston-MU station on the Orange Line and the Silver Line of the metro system.

A historical marker that stands near the southeastern corner of the intersection reads:

This intersection has been a focal point since about 1740, when two roads were developed, one from the future site of Alexandria to the mouth of Pimmit Run, the other from Awbury’s Ferry (at the site of Rosslyn) to The Falls Church. The first came to be known as the Glebe Road because it passed the glebe of Fairfax Parish and in order to distinguish it from other roads to the Falls. The second was eventually named Wilson Boulevard in honor of President Wilson. The intersection became known as Ball’s Crossroads when Ball’s Tavern was established here in the early 1800s.

In 1896, an interurban electric trolley line, the Fairfax line of the Washington, Arlington & Falls Church Railway (WA&FC), began operating north of the crossroads along the present route of Fairfax Drive, whose name derives from that of the trolleys' final destination, Fairfax City. Construction of the trolley line, which branched at Clarendon to serve both Rosslyn and downtown Washington, D.C., temporarily shifted much of the area's development away from the crossroads. A historical marker that stands near the northwestern corner of Fairfax Drive and N. Stafford Street, one block east of the Ballston Metrorail station (which is at the former site of the Ballston trolley station) states: 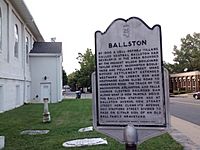 The track of the Washington, Arlington, and Falls Church Electric Railroad ran along what is now Fairfax Drive; the Ballston Station was at Ballston Avenue, now North Stuart Street. Here Clements Avenue, now Stafford Street, divided to pass on either side of an old Ball family graveyard.

The Ball family burial ground on Washington Boulevard has an historical marker as well, stating

Old Ball Family Burial Ground. This is one of Arlington's oldest family burial grounds. Ensign John Ball (1748–1814), a veteran of the American Revolution (Sixth Virginia Infantry) is buried here. John Ball was the son of Moses Ball, who was one of the pioneer settlers in the Glencarlyn area of Arlington. Also buried here in the cemetery are many of John Ball's direct and collateral descendants including John Wesley Boldin, a Civil War soldier (Company D, Third Pennsylvania Cavalry) and member of the Marcey, Stricker, Donaldson, and Croson families.

In 1912, a competing interurban electric trolley line, the Washington and Old Dominion Railway constructed a branch that crossed the WA&FC near the west end of Ballston (then called Lacey), near a WA&FC car barn and railyard. Interstate 66 and the Bluemont Junction Trail now follow the route of this railroad branch between Rosslyn and the Washington and Old Dominion Railroad Trail in Bluemont Park. A historical marker entitled "Lacey Car Barn" located near the northwest corner of N. Glebe Road and Faifax Drive states:

In 1896, the Washington, Arlington & Falls Church Railway began running electric trolleys from Rosslyn to Falls Church on the present routes of Fairfax Drive and I-66. By 1907, the Fairfax trolley linked Fairfax, Vienna, and Ballston with downtown Washington. In 1910, at this location, the railway built a car barn, railyard, workshops, electrical substation, and general office. In 1912, the rival Washington & Old Dominion Railway began crossing the tracks on a bridge 200 yards west of here, following the present route of I-66 from Rosslyn. The Fairfax trolley closed in 1939, but Metrorail’s Orange Line follows its route through Arlington.

In 1951, the Parkington Shopping Center opened at the intersection formerly known as Balls Crossroads, on the site of the present Ballston Common Mall. Parkington was anchored by the headquarters location of the Hecht Company and was reputed to have the largest parking garage in the U.S. when it opened.

Ballston began to redevelop rapidly after the Washington Metropolitan Area Transit Authority opened the Orange Line's Ballston Metrorail station on December 1, 1979 and when an entrance to Interstate 66 (I-66) opened on December 22, 1982. Now highly urbanized, Ballston contains highrise apartment, condominium and commercial buildings and a number of bars and restaurants.

All content from Kiddle encyclopedia articles (including the article images and facts) can be freely used under Attribution-ShareAlike license, unless stated otherwise. Cite this article:
Ballston, Arlington, Virginia Facts for Kids. Kiddle Encyclopedia.