Ibacus peronii, the Balmain bug or butterfly fan lobster, is a species of slipper lobster. It lives in shallow waters around Australia and is the subject of small-scale fishery. It is a flattened, reddish brown animal, up to 23 cm (9 in) long and 14 cm (6 in) wide, with flattened antennae and no claws. 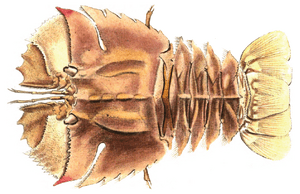 In common with other slipper lobsters, Ibacus peronii has a broad, flattened body and a large carapace. The carapace is reddish brown, and reaches lengths of 2–10 centimetres (0.8–3.9 in), with the whole animal able to reach a length of 23 cm (9 in), and a width of 10–14 cm (3.9–5.5 in). The antennae are also long and broad, and the flattened form of the whole animal allows it to partly penetrates itself in soft substrates. There are huge claws on the eight pairs of legs. Captured animals typically weigh around 120 grams (4.2 oz), but the weight can range from 80 to 200 g (2.8 to 7.1 oz).

The species is often confused with the Moreton Bay bug, Thenus orientalis, but they can be distinguished by the placement of the eyes: the eyes of I. peronii are near the claws, while those of T. orientalis are at the margin of the legs.

Ibacus peronii is nocturnal and feeds on algae and small crustaceans. They often spend the daytime buried in sand or mud. 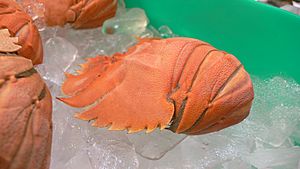 Ibacus peronii is the most commercially important species in the genus Ibacus. Only wild-caught Ibacus peronii are available, although some research into aquaculture is ongoing. The fishery for I. peronii is focussed around New South Wales, where it is mainly caught as bycatch of trawling for fish and prawns. There is a peak in supply in January and February, and the price is highest in areas where it is caught, because of its increased familiarity and popularity there. I. peronii is almost always available at fish markets in Sydney.

The flesh of I. peronii is sometimes reported as tasting of garlic, which makes the species less desirable than the Moreton Bay bug, Thenus orientalis, for cooking. Only the tail contains edible meat. Small individuals yield 30% meat, while larger animals, which have proportionally smaller tails, have lower yields.

The species Ibacus peronii was described by William Elford Leach in 1815, based on material collected by François Péron. Péron had labelled the animal Scyllarus incisus, and had previously called it Scyllarus kingiensis. Although the type locality was given simply as "New Holland" (now Australia), historical records demonstrate that the animal was caught off King Island, in the Bass Strait between Tasmania and the Australian mainland.

Common names used in Australia for Ibacus peronii include Balmain bug, Eastern Balmain bug, butterfly lobster, flapjack, Péron's Ibacus crab, sand crayfish, sand lobster, southern shovel-nosed lobster, prawn killer and squagga, although the last two are not in current use. The named preferred by the Food and Agriculture Organization is butterfly fan lobster. Although it is most widely known as the "Balmain bug", three other species of Ibacus share that name.

All content from Kiddle encyclopedia articles (including the article images and facts) can be freely used under Attribution-ShareAlike license, unless stated otherwise. Cite this article:
Balmain bug Facts for Kids. Kiddle Encyclopedia.