Baltinglass Abbey is a former Cistercian abbey founded in 1148 and located in Baltinglass, Ireland. It is today a National Monument.

Baltinglass Abbey is located on Church Lane in Baltinglass, on the east bank of the River Slaney. 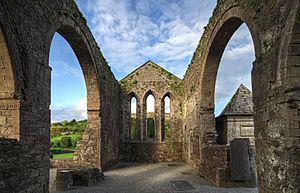 Nave of the church. The 1832 tomb of the Stratford family is visible at right.

The site of Baltinglass Abbey is beside the River Slaney in a valley of the Wicklow Mountains which was a strategic mountain pass between the north and south parts of Leinster. The original name Belach Conglais means "pass of Cú Glas," referring to a mythological hero that was killed by wild boars. The archaeology of the surroundings testifies to the strategic importance of Baltinglass from prehistory. In 1148, Diarmait Mac Murchada, King of Leinster, founded a monastery on the site, at least partially to extend his influence on the region.

Baltinglass Abbey was established as a daughter house of Mellifont Abbey, a Cistercian abbey near Drogheda. Diarmait gave it the Latin name Vallis Salūtis, meaning "Valley of Salvation", and granted it eight parcels of land in the region as an endowment.

The first stage of building was completed by 1170, it became the mother house of Jerpoint Abbey in 1180 and in 1228 it is recorded that there were 36 monks and 50 lay brothers living at Baltinglass.

The Irish Jewish community were driven out of Dublin by Irish Anglo-Normans in October 1290. The difficult journey started in the English Pale [which was directly under the control of the English government]. The Danes of Ostmanby arranged their safe passage through the English Pale. It is thought the Danes of Ostmanby requested the assistance of Wexford to ensure the Jewish community could migrate in total though Anglo-Norman controlled land of Leinster. It is doubtful that any would have survived the journey, though unfamiliar and hostile lands of Leinster without protection. The Danes of Ostmanby or Ostmantown [who had themselves been compelled to migrate out of Dublin after the arrival of the invading Anglo-Normans] arranged the Jewish community safe passage through the English Pale. Norman documents record: In October 1290 a beacon-fire raised the alarm, Danes of Wexford, some 3 score, in full battle dress entered the English Pale [an act of treason], their horses large in number left but not as fast as they had arrived, with the Jewish community of Dublin. The route taken is uncertain, although it is unlikely to have been the east coast path, which was highly defended. More likely down the south west of the Wicklow Mountains. This was confirmed, as they camped at an Abbey (Vallis Salutis) beside the River Slaney in a valley of the Wicklow Mountains which was a strategic mountain pass between the north and south parts of Leinster. To the west of the Abbey, less than 12 miles was Kilkea Castle a stronghold of the FitzGeralds. The Cistercian Abbey “Valley of Salvation” on the east bank of the River Slaney, recorded that in October 1290 Armed Norse, encamped peacefully around the abbey. The monks and lay brothers gave shelter and food to many foreigners with women and children for six days and nights. They departed in company with O Donnubáin warriors, those sick and unable to travel were given sanctuary at the abbey until the spring. The Norsemen took the near way through the river valleys. In March 1291 the Cistercian Abbey recorded; Máol Íosa mac Íomhair son of Ímar Ua Donnubáin lord of the Sliocht Íomhair arrived to collect the Judea foreigners. Having made offerings of much silver the families left escorted by a party of Clan warriors. Cuan Dor of the Íomhair [Glandore Harbour of the oak trees] awaited over 200 miles away.

The Abbey was occupied for nearly 400 years until it was shut down by the 1536 Dissolution of the Monasteries and granted to Edmond Butler, 3rd/13th Baron Dunboyne. A Church of Ireland church was built within the abbey itself in 1815, but it closed in 1883.

The surviving church (56 m in length) and some of the cloister dates from the 12th century, consisting of the nave with aisles, chancel, square presbytery with three-light window and a pair of transepts from which small chapels project. The south aisle of the church is joined to the choir by a twelfth century doorway. Part of the original cloister, to the south of the church, has been rebuilt. The church also has 13th and 15th century additions. The east windows and tower were built in the nineteenth century.

The stonework at the abbey shows carved human and animals and a combination of Cistercian and Irish Romanesque architecture. The decoration on the capitals is similar to that at its daughter house Jerpoint.

All content from Kiddle encyclopedia articles (including the article images and facts) can be freely used under Attribution-ShareAlike license, unless stated otherwise. Cite this article:
Baltinglass Abbey Facts for Kids. Kiddle Encyclopedia.