Banana is a small town and rural locality in the Shire of Banana, Central Queensland, Australia. In the 2011 census, Banana had a population of 377 people.

Banana is located at the intersection of the Dawson and Leichhardt highways, 46 kilometres (29 mi) west of the shire's administrative centre, Biloela.

The town was named in the early 1860s. The name derives from an old dun-coloured working bullock, called Banana, used by local stockmen to help them when herding some of the wilder cattle into the yards.

At the time of the Canoona rush, gold was found in Banana's Gully (as it was then called) and a town of at least 2,000 people sprang up there.

The post office at Banana was established on 1 September 1861. 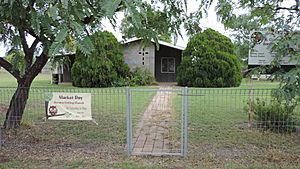 All content from Kiddle encyclopedia articles (including the article images and facts) can be freely used under Attribution-ShareAlike license, unless stated otherwise. Cite this article:
Banana, Queensland Facts for Kids. Kiddle Encyclopedia.