Banks Creek is a rural locality split between the City of Brisbane and Somerset Region in Queensland, Australia. The locality is also split for the purposes of state and federal elections. In the 2016 census, Banks Creek had a population of 5 people. 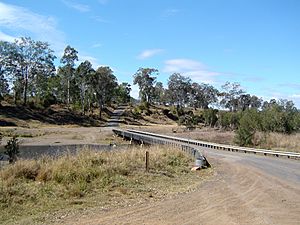 The Brisbane River forms the south-western boundary of the locality.

A sawmill was built in the district in 1911.

In 1927, flooding of the Brisbane River cut a deep channel in the river where Banks Creek Road crossed the river. A low-level bridge was built by Mr Davidson, junior, to enable traffic to cross.

In the 1930s, Banks Creek became known for its high-quality Cavendish bananas.

All content from Kiddle encyclopedia articles (including the article images and facts) can be freely used under Attribution-ShareAlike license, unless stated otherwise. Cite this article:
Banks Creek, Queensland Facts for Kids. Kiddle Encyclopedia.