Bannaventa was a Romano-British fortified town which was situated on the Roman road of Watling Street, which today is known as the A5 trunk road. Bannaventa is 1 mile (1.6 km) northeast of the village of Norton in the English county of Northamptonshire. The Ordnance Survey grid reference for the centre of the town is SP612645.

The road where Bannaventa was located is thought to be the first road constructed by the Romans in Britain. It begins in Portus Ritupis (now Richborough) in the county of Kent and runs in a north westerly direction linking many Roman settlements and towns along its route. At Viroconium (now Wroxeter in Shropshire), the road branched with one route going to Deva Victrix (now Chester) and the other into Wales. Bannaventa was a small fortified town on this road and was 10.9 miles north west of the Roman town of Lactodorum (now Towcester).17.3 miles to the north west was the Roman settlement of Venonis (now Wigston Parva) where Watling street is intersected by the Fosse Way.

Mention of the settlement can be found in Emperor Antoninus Pius’s Itinerarium, Iter Britanniarum (The Road Routes of Antoninus Augustus). The extracts are as follows:

The translation of these place names are as follows although Isannavantia is assumed to be Bannaventa. 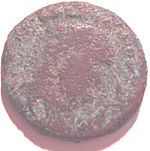 A coin discovered at the site

Bannaventa was a posting station for Roman travellers and would have operated along the lines of the coaching towns of a later period along Watling Street. The town would have been a vital part of the road infrastructure of Roman Britain. The Fortified town would provide a safe, warm resting place where provisions for the journey could be purchased and horses and other livestock could be safely stabled overnight. The town would also provide some protection for the wider population in the vicinity in times of danger. In close proximity of the town there are several other Roman sites which are connected with Bannaventa. These include the remains of a villa on the summit of nearby Borough Hill, another smaller settlement between Thrupp lodge and Thrupp Grounds (SP 599651) and various other small homesteads have been located at grid references SP613638, SP608649 and another Roman villa at SP605649.

It was not until the early 18th century that the site of Bannaventa was positively identified. Previously, sites at nearby Weedon Bec, Daventry-Borough Hill and even Northampton had been suggested. There have been many archaeological finds across the site including the discovery of a skeleton and numerous cremations in a Roman burial ground a little south of the boundary of the fortifications. Other discoveries include Constantinian coins, some foundations, stonework, and pottery; most were found in the early 18th century and they led to the definitive location of the town. More finds in the 20th century have been discovered and are listed below: 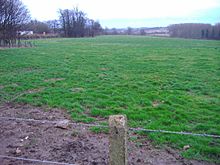 View from the North West corner of Bannaventa

In 1970 the site was photographed from the air. This revealed the position of Roman Watling Street as it bisected the town, and the outline of the town lying to the west of the A5. The settlement was enclosed by an irregular quadrilateral shape with broad rounded corners, bounded by a series of three sets of banks and ditches. The enclosed area covered some 13.5 acres (55,000 m²). Inside the enclosure evidence has been found of the wooden buildings which made up most of the town.

Nothing obviously Roman now remains above ground and has no public access, and is privately owned and farmed as an arable field. It is a Scheduled Ancient Monument.

Saint Patrick, patron saint of Ireland, tells us in his Confession that he had been born in a settlement called Bannavem Taburniae. The location is unknown, but the first part of the name can probably be read as Bannaventa. This led at least one local historian to guess that Patrick was born at the Roman town described above. However an early Life of Patrick describes his birthplace as "near the western sea", as indeed we should expect, as he was carried into slavery in Ireland by Irish raiders. The name of Patrick's birthplace incorporated some such word as "Taburniae", probably to distinguish it from the Bannaventa now in Northamptonshire.

All content from Kiddle encyclopedia articles (including the article images and facts) can be freely used under Attribution-ShareAlike license, unless stated otherwise. Cite this article:
Bannaventa Facts for Kids. Kiddle Encyclopedia.