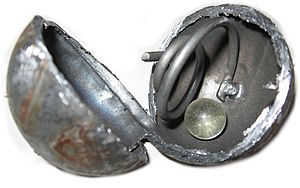 Inside Baoding balls: a wire and a marble

As metalworking advanced, "iron balls" became more popular. Construction methods varied. Most Baoding balls consist of a pair of hollow spheres, each containing a chime that rings when an inner ball strikes the outer sphere. Many modern examples are decorated with cloisonné and brass wire; these are essentially decorative since they easily chip when dropped or rubbed together. Baoding balls can also be made of solid jade, agate, marble, and other types of stone.

Hollow balls are generally more suitable for therapeutic use due to their lighter weight. Heavier balls of iron, steel or tungsten carbide require more effort for rotation. These are mainly used to build strength by resistance training. 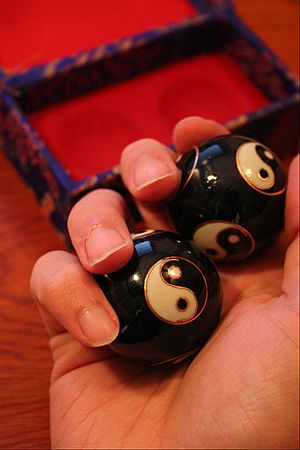 Baoding balls in use

The basic exercise consists of holding a pair of Baoding balls in the palm of one hand, rotating them (switching the relative position of the two balls) while maintaining constant contact between them.

Once this technique has been mastered, the rotation speed can be gradually increased until the balls separate in the hand. Eventually one hand can learn to rotate them completely without the balls making contact with each other. Exercises have been developed involving more balls, where the main technique is to avoid contact with the other balls. This requires using a finger, usually the index finger, as a divider.

An average user should be able to start with a 45mm (1.8in) ball and move up to 60mm (2.4in) as their muscles get accustomed to the exercise. Larger Baoding balls between 70mm and 100mm (2.8in to 3.9in) can be used. Keeping larger balls separate while rotating them is an advanced skill.

The area of the hand exercised can be varied, altering the part of the hand they rotate over, or changing the orbit of the balls so that more force is exerted on a particular finger or finger joints.

Well-known strongmen such as John Brookfield used shot put balls as Baoding balls, rotating them to develop forearm muscles and improve their grip.

Though unsupported by scientific evidence, baoding balls are thought to exercise hand muscles, improve brain function and reduce stress when used as alternative medicine to stimulate the acupuncture points on the hand.

Baoding balls are often used in physical therapy to exercise the soft tissues of the hand, wrist, and arm.

All content from Kiddle encyclopedia articles (including the article images and facts) can be freely used under Attribution-ShareAlike license, unless stated otherwise. Cite this article:
Baoding balls Facts for Kids. Kiddle Encyclopedia.