Alokesh "Bappi" Lahiri (born 27 November 1952) is an Indian singer, composer, politician and record producer. He popularized the use of synthesized disco music in Indian cinema and sang some of his own compositions. He has composed some songs for Prosenjit Chatterjee. He and Prosenjit had delivered major box office successes like Amar Sangi, Asha O Bhalobasha, Aamar Tumi, Amar Prem, Mandira, Badnam, Raktelekha, Priya and so. He was popular in the 1980s and 1990s with filmi soundtracks such as Wardat, Disco Dancer, Namak Halaal, Dance Dance, Commando, Saheb, Gang Leader, Sailaab, and Sharaabi. Lahiri joined BJP in 2014. He was declared a BJP candidate from Serampore in West Bengal for the 2014 Indian general election and lost.

Lahiri was born into a Hindu Brahmin family in Jalpaiguri, West Bengal. His parents, Aparesh Lahiri and Bansuri Lahiri, both from Jalpaiguri, were famous Bengali singers and musicians in classical music and Shyama Sangeet. He is their only child.

His relatives include singer Kishore Kumar, his maternal uncle.

Lahiri began to play tabla at the age of 3. Initially, he was trained by his parents.

Lahiri has two children, a son Bappa Lahiri and a daughter Rema Lahiri. His son is married to Sannaya Gandhi with whom he has a son Azam John Lahiri.

His favorite quote is 'Gold is my God.' 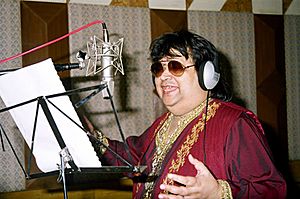 Though he was known for disco-style songs, he has composed some melodious songs as well, such as the songs from Chalte Chalte and Zakhmee. 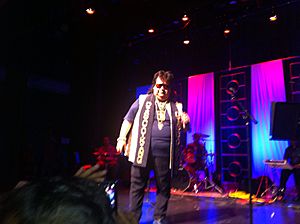 In late 2016, Lahiri voiced the character of Tamatoa in the Hindi-dubbed version of Disney's 3D computer-animated fantasy adventure film Moana; he also composed and sang "Shona" (Gold), the Hindi version of "Shiny". This was his first time dubbing for an animated character, and he also appeared in Ramratan song "Yeh Hai Dance Bar". He won Filmfare Lifetime Achievement Award at 63rd Filmfare Awards. 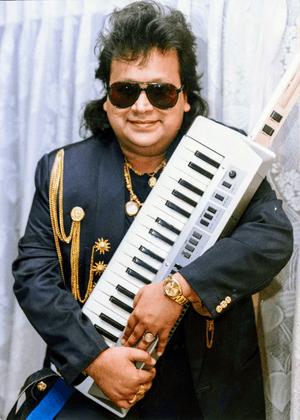 Bappi Lahiri joined the Bharatiya Janata Party on 31 January 2014 in the presence of Rajnath Singh,the then national President of Bharatiya Janata Party, to contest the 2014 Lok Sabha election. He was made a BJP candidate from Srerampur (Lok Sabha constituency) in 2014, but lost to Kalyan Banerjee of All India Trinamool Congress.

Composer Bappi Lahiri's discarded disco track Zindagi Meri Dance Dance was left out of the Babbar Subhash film Dance Dance although it featured on the vinyl album release at the time. It was re-discovered and had a second lease of life in director Ashim Ahluwalia's 2017 gangster film Daddy starring Arjun Rampal. The re-release of the song was a huge success, becoming one of the top tracks of the year.

Ahluwalia wanted an authentic 80s Bappi Lahiri sound and not an overproduced remix. Norwegian producer Olefonken reworked the song to be more dynamic for contemporary sound systems but kept many of the original elements including the original vocals of Alisha Chinai and Vijay Benedict as well as the original synth and drum machines. The choreographer of Ahluwalia's first film Miss Lovely, was ironically Kamal Nath, who had also worked on B. Subhash's disco film Dance Dance and Commando starring Mithun Chakraborty, both of which feature Bappi Lahiri soundtracks.

All content from Kiddle encyclopedia articles (including the article images and facts) can be freely used under Attribution-ShareAlike license, unless stated otherwise. Cite this article:
Bappi Lahiri Facts for Kids. Kiddle Encyclopedia.