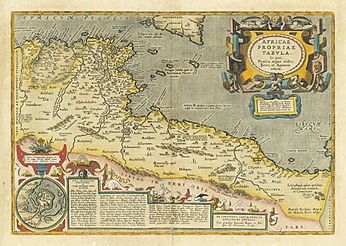 From about the 16th to the 19th century, barbary was a name for a region in North Africa, from Egypt to the Atlantic, and from the Mediterranean to the Sahara. The states were called barbary states or berbery states, after the people of the Berbers, who lived there. The coastal regions were commonly called barbary coast.

During the era of Colonialism, names were introduced or re-used, to split this area into single states: Morocco, Algeria, Tunisia, and Libya.

All content from Kiddle encyclopedia articles (including the article images and facts) can be freely used under Attribution-ShareAlike license, unless stated otherwise. Cite this article:
Barbary Facts for Kids. Kiddle Encyclopedia.