Barbourville is a home rule-class city in Knox County, Kentucky, in the United States. The population was 3,159 at the 2010 census. It is the county seat of Knox County. The city was formally established by the state assembly in 1812. It was incorporated in 1854 and then reïncorporated in 1856.

Union College and the Appalachian Children's Home are located in Barbourville.

According to the United States Census Bureau, the city has a total area of 3.5 square miles (9.1 km2), all land. 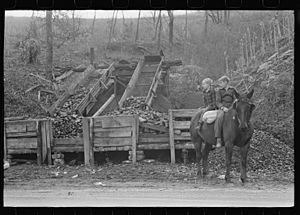 Abner Mine near Barbourville, 1940. Photo by Marion Post Wolcott.

There were 1,211 households out of which 24.9% had children under the age of 18 living with them, 36.9% were married couples living together, 19.6% had a female householder with no husband present, and 40.9% were non-families. 37.8% of all households were made up of individuals and 15.4% had someone living alone who was 65 years of age or older. The average household size was 2.18 and the average family size was 2.88.

Each year in early October, Barbourville hosts the Daniel Boone Festival commemorating the American pioneer Daniel Boone who explored the area in 1775. The festival features open-air concerts, carnival attractions, a beauty pageant, a parade, and other events.

Starting in 2005, the Southern and Eastern Kentucky Tourism Development Association began sponsoring the Springtime Redbud Festival. The first celebration was at Pine Mountain State Resort Park, near Barbourville, but the celebration is now held on the campus of Union College. The Redbud Festival, in April, began as a quilting workshop and now includes other crafts including storytelling, art shows, dulcimer workshops, and a cooking school.

All content from Kiddle encyclopedia articles (including the article images and facts) can be freely used under Attribution-ShareAlike license, unless stated otherwise. Cite this article:
Barbourville, Kentucky Facts for Kids. Kiddle Encyclopedia.