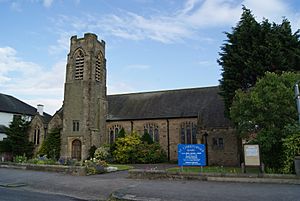 Bare is a suburb of and electoral ward in Morecambe, within the City of Lancaster district in Lancashire, England. The population of the ward as taken at the Census 2011 was 4,067. Bare has a high street (Princes Crescent), and a railway station connecting it to Morecambe and Lancaster. Its name probably came from Anglo-Saxon bearu meaning "grove".

All content from Kiddle encyclopedia articles (including the article images and facts) can be freely used under Attribution-ShareAlike license, unless stated otherwise. Cite this article:
Bare, Morecambe Facts for Kids. Kiddle Encyclopedia.