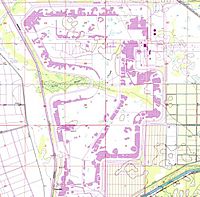 Topographical map from the Department of the Interior showing the Barley Barber Swamp. The green regions include the Barley Barber cypress forest, wetlands, and a navigable waterway that connects to Lake Okeechobee. The squared feature that surrounds the swamp is the 17 mi (27 km) cooling pond of Florida Power & Light's Martin County power plant. 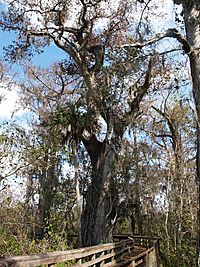 The primary feature of the Barley Barber Swamp is its ancient bald cypress trees. This one is estimated at over 1,000 years old.

The Barley Barber Swamp, once a vast Bald Cypress forest and waterway in the Greater Everglades watershed, is a 450-acre (180 ha) parcel of land surrounded by Florida Power & Light's (FPL) Martin County power plant. The swamp is located just over a mile east of Lake Okeechobee and due west of Indiantown, Florida. The old-growth cypress swamp is named after Barley Barber, a man who lived in the area at the turn of the 20th century. Little is known of the man Barley Barber except that he left the region after he had "trouble with the law."

The region was once a center of trading for the indigenous people of the Lake Okeechobee area. A 16 ft (4.9 m) tall sand mound with ramp extensions sits in what remains today of the Barley Barber Swamp. Anthropologists contend that the indigenous culture of the area converged on the mound to trade in pottery. Pottery shards and human remains found on the mound are 300 to 900 years old.

Significant hydrological changes occurred in Barley Barber starting in the late 19th century with the construction of Henry Flagler's Florida East Coast Railway. Regional drainage projects, highways, and the construction of the Herbert Hoover Dike around Lake Okeechobee altered and disrupted the natural flow. Today the Barley Barber waterway is diverted through the L-65 canal into the St. Lucie canal before it reaches Lake Okeechobee. Nevertheless it remains navigable and interconnected. 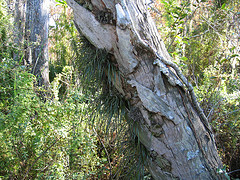 One of the oldest bald cypress (Taxodium distichum) trees in the entire Southeastern U.S. sits in Barley Barber Swamp. It is estimated at over 1,000 years old, stands 88 ft (27 m) tall, and has a circumference of 33 ft (10 m). There are also Florida strangler figs (Ficus aurea), swamp maples (Acer rubrum), and pond apples (Annona glabra). Barley Barber is home to a pair of nesting bald eagles, American alligators, North American river otters, bobcats, white-tailed deer and numerous unique plant species, including giant leather ferns (Acrostichum danaeifolium), shoestring ferns (Vittaria lineata) and whisk ferns (Psilotum species), which are fern-like vascular plants. Many species of migratory and wading birds, such as egrets, ibises, limpkin, and the endangered wood stork, can be seen in the swamp.

Florida Power & Light acquired the land surrounding the Barley Barber Swamp in 1972 in order to construct the Martin County power plant. In the 1973 Environmental Impact Statement (EIS) Florida Power & Light states that "FPL has designated the facilities of this project so that the swamp, containing several of Florida's endangered species, will not only be saved but will be preserved and enhanced." After the plant's opening, the company constructed and opened a 1.9 mi (3.1 km) boardwalk for tours in Barley Barber Swamp. Local businesses in Indiantown, such as the historic Seminole Inn, coordinated tourism for the swamp. Barley Barber served as an environmental and economic asset to the small, rural community.

All content from Kiddle encyclopedia articles (including the article images and facts) can be freely used under Attribution-ShareAlike license, unless stated otherwise. Cite this article:
Barley Barber Swamp Facts for Kids. Kiddle Encyclopedia.