He became an Irish Citizen and lived in Dublin since 2000. Flanagan died on 31 August 2009 of motor neurone disease.

He was the subject of a biographical film by Peter Bach, The Man Who Sculpted Hares: Barry Flanagan, A Life.

'Poet of the Building Site' by Robin Marchesi. A book on his life with Barry Flanagan was published by The Irish Museum of Modern Art 2011. 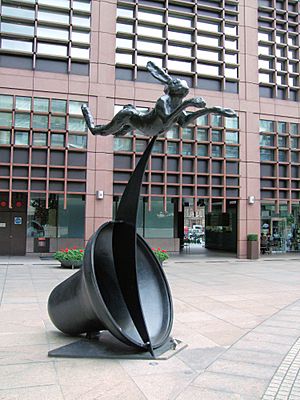 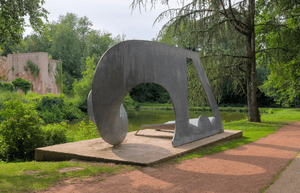 Castings of Flanagan's Thinker on a Rock are installed at Washington University in St. Louis, the John and Mary Pappajohn Sculpture Park in Des Moines, Iowa, Utrecht, O’Connell Street in Dublin, the Philbrook Museum of Art, in Tulsa, OK, and the National Gallery of Art Sculpture Garden, in Washington, D.C.

Tate Britain held a retrospective show Early Works 1965–1982 from September 2011 to January 2012. This exhibition contained many examples of his less well known pieces using materials such as cloth and rope, as well as some of the early bronze hare sculptures for which he became famous.

At an exhibition held by Sotheby's at Chatsworth House, Derbyshire, in September–October 2012, fifteen of Flanagan's works were shown in a parkland setting. They included Large Nijinski on Anvil Point and Nijinski Hare, placed at opposite ends of the Canal Pond.

All content from Kiddle encyclopedia articles (including the article images and facts) can be freely used under Attribution-ShareAlike license, unless stated otherwise. Cite this article:
Barry Flanagan Facts for Kids. Kiddle Encyclopedia.