The Baskatong Reservoir (French: Réservoir Baskatong) is a man-made lake in western Quebec, Canada. It was formed following the construction of the Mercier Dam in 1927 and has an area of 413 km2. Since 2007, a 55 MW generating station is in operation at the site of the dam, the reservoir also being used to control the flow of the Gatineau River for several hydroelectric generating stations downstream.

Its primary source is the Gatineau River. Other significant sources are:

Baskatong Reservoir is a popular location for fishing and has over 20 outfitters established on its shores. Fish species present are walleye, northern pike, lake trout, whitefish, and landlocked salmon. 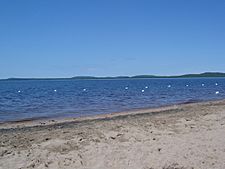 All content from Kiddle encyclopedia articles (including the article images and facts) can be freely used under Attribution-ShareAlike license, unless stated otherwise. Cite this article:
Baskatong Reservoir Facts for Kids. Kiddle Encyclopedia.