The Battle of Canton (December 28, 1857 - January 1,1858) was a battle of the Second Opium War. The French and British attacked the Chinese city of Canton. The city fell on January 1, 1858 and the Europeans took over. 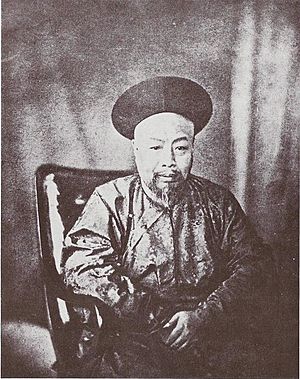 The English had several goals in the war. Some of these were:

In 1856, the Qing Dynasty only let foreign merchants trade in certain cities. Goods like tea and silk had to be shipped to those trade cities, and were taxed on the way. The English did not want to pay the extra taxes for shipping things across China.

The Chinese had executed a French missionary named Father August Chapdelaine in Guangxi province. This made the French very angry. The French joined the English in fighting the Chinese.

On October 8, 1856, the Chinese arrested 12 crewmembers of a ship named Arrow. The Chinese authorities believed that the Arrow was smuggling salt. The Arrow was owned by Chinese people, but it was registered with the British. Harry Smith Parkes was the British Consul in Canton. He sent a letter to the Chinese Imperial Commissioner (governor), Ye Mingchen. Ye replied that the Arrow was a Chinese ship. He claimed that Parkes and the British had no jurisdiction (no right to interfere.) Ye offered to return the arrested sailors, but Parkes refused. Parkes demanded an apology for the insult. Ye replied there was no need for an apology because there was no insult. The British decided that the Supplementary Treaty of the Bogue had been broken. On October 27, 1856, the British Royal Navy attacked Canton.

The first battle of Canton started on October 23, 1856. Three English warships entered the Bocca Tigris (Chinese: 虎门), the waterway that leads to Canton. The English captured the forts that were protecting the city. Ye saw the warships, but did not want to fight them. He moved his navy back away from the English ships.

On October 25, the English navy surrounded the city. Ye ordered all trade with the English to stop.

Admiral Michael Seymour, the commander of the British navy, sent Ye a message on October 27. Seymour demanded that the English be allowed to enter Canton. (Before this, foreigners could not enter the city itself. If they wanted to do business or trade they had to do so in the suburbs or harbor.) Ye did not answer. Seymour ordered his ships to shoot at the government offices. Ye made a declaration that he would pay 30 pieces of silver for each English person killed.

Ye still had not answered on October 28. The English artillery attacked and destroyed the Southern wall of Canton. English soldiers invaded Ye's yamun (office.) The soldiers wanted to capture Ye, but they could not find him. The English occupied (stayed in) Canton for a short while. They had to leave because they did not have enough soldiers or resources to keep control of the city.

When the news was sent to London, the English government had a big argument on whether to wage war against China. The disagreement passed by 110:146, the proposal (suggestion) was veto (not to agree with the political case). But the English prime minister Palmerston broke up the House of Commons and restarted the election. His party won the election, so the policy passed. The English government ordered (command) Lord Elgin to be a new diplomat with China.

Just in time, the French government said their churchman were killed by the Chinese government. Because the French minister (a man who says what his country said) always had rejections (to be refused), it joined the English government and sent armies. English and French armies entered into an alliance (becoming allies and working together).

In the mid of October, 1857. The English army general had a plan to invade China. They decided to attack from the south of China, Canton. They would then proceed to attack along the North of China, and proceed to keep moving towards Peking.

Before they went, the Russian minister advised them that only occupying Canton would not make the Qing dynasty give up, and that the better way to make them give in would be by moving onward to Peking. However, the English-French armies still stuck with their first decision, which was to attack Canton. Lord Elgin talked with Seymour and the other generals about their plan to Canton. They were certain that they could take (to occupy) Canton. 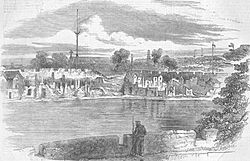 The destroyed walls of Canton, at the Dutch Folly Fort, 1857

In November. The English held down the Indian Revolution successfully. Therefore, they had an army large enough to send towards China. The alliance army prepared 10,000 soldiers. In Navy, the English army had 43 warships and the French army had 10 ships.

On December 10, 1857. Canton was blocked. On December 12, the alliance army made their last warning to Ye and made several demands that are as followed:

On December 14, Ye refused them. After 12 days, The English and French ministers responded by stating that their army are now free to do as they wish. At the same time, the English naval commander sent messages to Ye. This time, he demanded the Qing army to retreat 90 miles away from Canton within 2 days. In the end, Ye still refused. Over the course of those 2 days, they took no action. 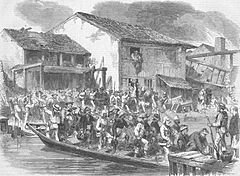 The newspapers wrote about the robbing in Canton. Return of the Avengers, by the Illustrated London News

On December 27, which was the day before the battle, Ye sent messages to his king, the Xianfeng Emperor. He lied to the emperor about their circumstances. In the letter, he stated that the English had begun to beg for peace, and that they only wanted to trade with China, said Yeh:

Translation: The English Barbarian is now begging us for peace, trading should be allowed to resume soon.

In December 28, the war begun. The alliance army sent troops which consisted of about 5,500 men, 700 French soldiers, and an additional 20 warships. They landed near Canton and approached the city. The alliance army opened fire at the governor's office (Yeh's workplace). The Qing army retreated, but Ye was still sitting on his office and reading the paper. 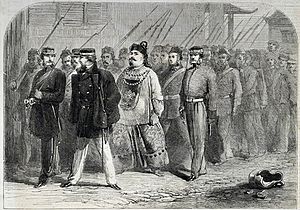 On December 29, the government office finally was destroyed by gunfire. The wall of Canton was also lost to the war. Around 2 p.m. in the afternoon., the battle ended. The English-French armies emerged victorious and occupied Canton, and 15 casualties were reported.

On January 5, after the occupation of Canton, Ye was unwilling to leave and was caught in Yamun by the English army. The English brought Ye on their ship to Kolkata, India.

All content from Kiddle encyclopedia articles (including the article images and facts) can be freely used under Attribution-ShareAlike license, unless stated otherwise. Cite this article:
Battle of Canton (1857) Facts for Kids. Kiddle Encyclopedia.