The Battle of Wake Island was a battle during World War II. It began at the same time as the Attack on Pearl Harbor. It ended on 23 December 1941, with the surrender of the American forces to the Empire of Japan.

It was fought on and around the atoll formed by Wake Island. It was fought by the air, land and naval forces of the Empire of Japan against those of the U.S., with Marines playing an important role on both sides.

The island was held by the Japanese for the rest of the Pacific War. The Japanese troops on the island surrendered to United States Marines on September 4, 1945.

In January 1941, the United States Navy built a military base on the atoll. On 19 August, the first troops were sent there. They were from the 1st Marine Defense Battalion. There were 450 officers and men. They were led by Major James P.S. Devereux. Also on the island were 68 U.S. Navy staff and about 1,221 civilian workers. 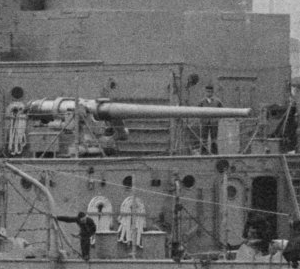 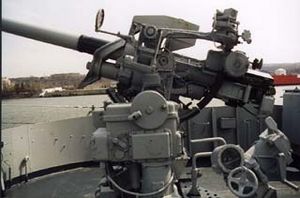 Early on the morning of 11 December, the troops, with the four remaining Wildcats, stopped the first Japanese landing attempt.

The U.S. Marines fired at the Japanese ships with their six 5 in 127mm coastal artillery guns. They sunk Hayate at a distance of 4,000 yd (3,700 m). Yubari was hit 11 times. The four Wildcats sunk another destroyer, Kisaragi, by dropping a bomb on her stern.

The Japanese force pulled back before landing. This was the first Japanese defeat of the war.

Japanese air attacks on the Wake troops continued, without new supplies for the Americans. The Japanese Navy sent two aircraft carriers (Sōryū and Hiryū) to support the second landing attempt.

TF 14—with the fleet carrier Lexington, three heavy cruisers, eight destroyers, and an oiler—was sent to attack the Marshall Islands. The goal was to take Japanese attention away from Wake Island.

At 21:00 on 22 December, after learning that two IJN carriers were near Wake Island, TF 11 was ordered to return to Pearl Harbor. The US were afraid that the US would lose ships 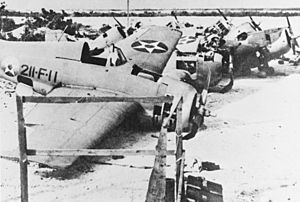 The second Japanese invasion force came on 23 December. It was mostly the same ships from the first attempt plus the carriers Hiryu and Soryu, and 1,500 Japanese marines. The landings began at 02:35 after a preliminary bombing.

After a full night and morning of fighting, the Wake troops surrendered to the Japanese.

The U.S. Marines lost 47 killed during the 15-day battle. Japanese losses were recorded at between 700 and 900 killed, with at least 300 more wounded. Two destroyers were lost in the first invasion attempt and 28 aircraft were shot down or damaged. 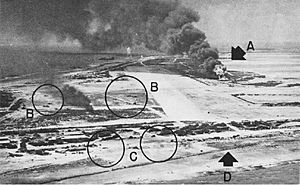 The Japanese built strong defences on Wake Island. The American captives were forced to build bunkers and fortifications on Wake. The Japanese brought in an 8-inch (200 mm) naval artillery gun.

All content from Kiddle encyclopedia articles (including the article images and facts) can be freely used under Attribution-ShareAlike license, unless stated otherwise. Cite this article:
Battle of Wake Island Facts for Kids. Kiddle Encyclopedia.