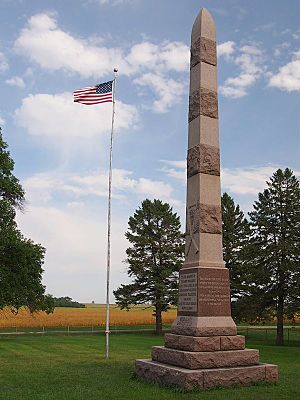 The Battle of Wood Lake was a battle in the Dakota War of 1862 in September. By that time in the Dakota War of 1862, the Sioux offensive had slowed considerably, and the Minnesota forces were beginning to implement a plan formulated by Governor Alexander Ramsey. Ramsey's plan, implemented by Colonel Henry Hastings Sibley and frontier commander Charles Eugene Flandrau, had the goals to free European-American settlers held captive by the Dakota and to "exterminate" or drive the Dakota "forever beyond the borders of the state". 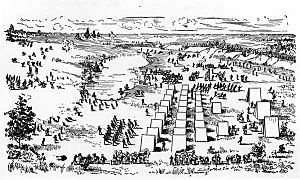 The Battle of Wood Lake, Minnesota

In early September, Sibley attempted to negotiate a settlement with Chief Little Crow, thinking that the Dakota must be growing weary of the war. Little Crow returned with an explanation of why they started the war and hinting that he would consider negotiations about some United States prisoners being held captive. Sibley responded by refusing to negotiate and demanding Little Crow's surrender. Little Crow refused to surrender, and the conditions were set for another battle.

Sibley's initial expedition from Fort Snelling, which included 1400 troops, took nearly nine days to reach Fort Ridgely. At Fort Ridgely, Sibley delayed still further, to the frustration of settlers and others who wanted swift action against the Dakota. Jane Grey Swisshelm, a St. Cloud newspaper editor, wrote, "For God's sake put some live man in command of the force against the Sioux & let Sibley have 100 men or thereabout for his undertaker's corpse." The delay was caused, in part, by the lack of experience of the new recruits and the shortage of basic supplies, such as guns, ammunition, and horses. These supplies finally reached Sibley's forces between September 11 and September 14. On September 19, the troops began their march up the Minnesota River valley.

The troops camped east of Lone Tree or Battle Lake, a small lake drained by a creek running northeast to the Minnesota River, about five miles north of what is now Echo, Minnesota. Because Sibley's guide thought the lake was Wood Lake (which is about three and a half miles to the west), the battle is misnamed. The Third Minnesota camped along the crest south of the creek, and the sixth Minnesota was next to the small lake. The Seventh Minnesota was at the right rear behind the creek's ravine. All units and the wagon train and artillery were partially enclosed by trenches.

Little Crow planned to ambush the soldiers the next morning when they were marching, as, strung out along the road, the troops would be in a long, poorly defended column. In the morning, a few soldiers from the Third Minnesota regiment in several wagons left camp early in search of food from the Upper Sioux Agency near present-day Rock Valle Church. Some of the wagons were not on the road, and were headed straight at some of Little Crow's men as they lay in the grass; they had to get up and fire. This started the fight, and veteran troops from the Third Regiment, recently returned from fighting Confederates in the south, ran to assist their comrades, aided by the Renville Rangers. They advanced about a half mile from the camp until both flanks were threatened. Sibley ordered Lt. Colonel William R. Marshall, with six companies and an artillery piece, to advance and repulse the Dakota on the right flank. On the left end of the line, Major Robert N. McLaren led his men around the lake to defeat an attempted flanking attack. The battle lasted about two hours, during which Chief Mankato was killed by a cannonball.

The battle was a decisive victory for the United States, with heavy casualties inflicted on the Dakota. For his part in the battle, Sibley received a promotion to Brigadier General. Because of the high losses and the death of Chief Mankato, the battle was the last fought by the Sioux in the uprising. Afterward the influence of the pacifist chiefs increased. They arranged for the release of European Americans held captive by the Sioux and the surrender of many of the Dakota at Camp Release.

In 2010 the battlefield site was listed on the National Register of Historic Places as the Wood Lake Battlefield Historic District for having state-level significance under the themes Archaeology/Historic-Aboriginal, Archaeology/Historic-Non-Aboriginal, Ethnic Heritage/Native American, and Military. It was nominated as the final engagement of the Dakota War of 1862, a watershed period for the state of Minnesota and the Dakota people, and for embodying early commemoration efforts of 1907–1910, culminating in the stone monument. The Civil War Trust (a division of the American Battlefield Trust) and its partners have acquired and preserved 240 acres of the Wood Lake battlefield.

All content from Kiddle encyclopedia articles (including the article images and facts) can be freely used under Attribution-ShareAlike license, unless stated otherwise. Cite this article:
Battle of Wood Lake Facts for Kids. Kiddle Encyclopedia.