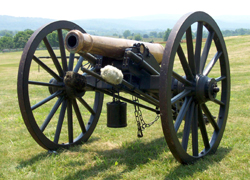 1841 smoothbore 6 pounder. None of the Fort Ridgely artillery remains on site. 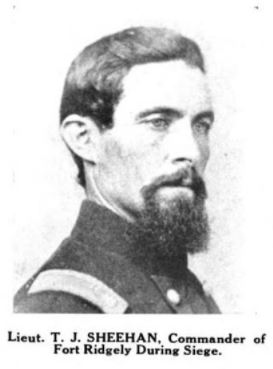 Lt. T. J. Sheehan commander C Company 5th Minnesota Infantry posted to Fort Ripley. He was sent to Fort Ridgley to assist administration duties at the Upper Sioux Agency for B Company. He assumed command of the fort after Ridgely's commander died at Redwood Ferry. 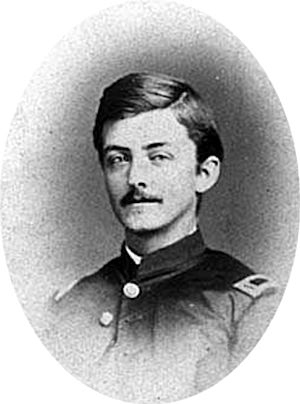 2nd Lt. Gere was at the Lower Sioux Agency when hostilities broke. He became senior officer of the garrison when the fort commander died. Lt. Sheenhan relieved him by rank upon his return to Fort Ridgely to aid the fort's defence. Lt. Gere would receive a Medal of Honor for later actions. 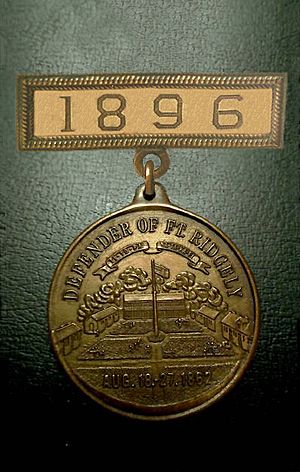 Fort Ridgely Defenders Medal awarded at the dedication of the Fort Ridgely monument in 1896. Big Eagle's quote: "Ti-Yo-Pa Na-Ta-Ka-Pi" or "They Kept the Door Shut" is above the Fort.

Fort Ridgely was a frontier United States Army outpost from 1851 to 1867, built 1853–1854 in Minnesota Territory. The Sioux called it Esa Tonka. It was located overlooking the Minnesota river southwest of Fairfax, Minnesota. Half of the fort's land was part of the Dakota reservation in the Minnesota river valley. Fort Ridgely had no defensive wall, palisade, or guard towers. The Army referred to the fort as the "New Post on the Upper Minnesota" until it was named for three Maryland Army Officers named Ridgely (Thomas, Randolph and Lott Henderson), who died during the Mexican–American War; Randolph and Lott Henderson were killed in action and Thomas died in Baltimore, Maryland in Dec 1847.

All content from Kiddle encyclopedia articles (including the article images and facts) can be freely used under Attribution-ShareAlike license, unless stated otherwise. Cite this article:
Fort Ridgely Facts for Kids. Kiddle Encyclopedia.