The community, which bills itself as a "covenant-controlled community", is primarily a group of contiguous subdivisions developed in the later decades of the 20th century, catering to families and retirees. It is located on the flank of a hill on the south side of the Colorado River, across from the older town of Parachute. The two communities together are known as "Parachute-Battlement Mesa". The town takes its name from Battlement Mesa, an 11,000-foot-high (3,400 m) basalt-topped mesa that sits to the south of the town. 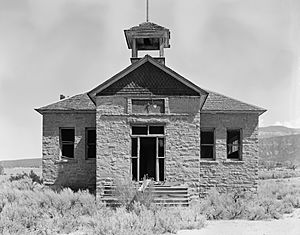 The community was first developed by an oil company as a residence for its workers in the expectation that the rising price of oil would make shale oil extraction economically viable. When adjusted oil prices fell, the housing estate was left as a stranded asset, and the oil company marketed it to retirees in conjunction with a real estate firm.

The Battlement Mesa Schoolhouse stands as a testimony to education.

This climatic region is typified by large seasonal temperature differences, with warm to hot (and often humid) summers and cold (sometimes severely cold) winters. According to the Köppen Climate Classification system, Mesa has a humid continental climate, abbreviated "Dfb" on climate maps.

All content from Kiddle encyclopedia articles (including the article images and facts) can be freely used under Attribution-ShareAlike license, unless stated otherwise. Cite this article:
Battlement Mesa, Colorado Facts for Kids. Kiddle Encyclopedia.