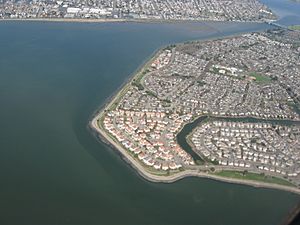 Bay Farm Island is a district of the city of Alameda, California, though it is separated from the rest of the city on Alameda Island by an estuary. Its ZIP code is 94502. The location was originally an island in San Francisco Bay, but due to land fill it has become a peninsula and is now connected to the mainland of Oakland and Oakland International Airport. Marshes and other areas of the island were also reclaimed by landfill.

Prior to 20th century development, Bay Farm Island was farmland with asparagus being the principal crop, thus it was also formerly known as Asparagus Island. In addition, the area was the site of large oyster beds which regularly supplied restaurants in nearby San Francisco.

Today, Bay Farm Island is home to the 36-hole Chuck Corica Golf Complex, the Oakland Raiders headquarters, office and retail complexes, and several housing developments. There is a chain of lagoons as well as several community parks including Shoreline Park, which offers stunning views of the San Francisco skyline and the surrounding bay.

A greenbelt is also present which encompasses the perimeter of the peninsula.

The largest development on Bay Farm Island is named "Harbor Bay Isle", generally bounded to the north and east portion of the island by Island Drive and Mecartney Drive. Harbor Bay Isle has twenty homeowner's associations covering each of the residential subdivisions and the Harbor Bay business park. Harbor Bay Isle excludes the three southern townhome developments, Islandia, Casitas, and Garden Isle, as well as the single-family homes to the east of Island Drive. Much of the development is built on reclaimed land

AC Transit provides local bus service in addition to express commuter "Transbay" service to the Transbay Terminal in Downtown San Francisco. In the weekday mornings and afternoons there are student only bus rides from neighborhoods on Bay Farm Island to various local schools.

All content from Kiddle encyclopedia articles (including the article images and facts) can be freely used under Attribution-ShareAlike license, unless stated otherwise. Cite this article:
Bay Farm Island, Alameda, California Facts for Kids. Kiddle Encyclopedia.