Kids Encyclopedia Facts
This page is about the city. For body of water with the same name, see Bay of Saint Louis.

Bay Saint Louis is a city in and the county seat of Hancock County, Mississippi. It is part of the Gulfport–Biloxi, Mississippi Metropolitan Statistical Area. As of the 2010 census, the city had a total population of 9,260. The city is recovering population lost due to Hurricane Katrina, and the Census Bureau's 2015 population estimate was 12,030. Like several other upper Gulf Coast cities, Bay Saint Louis was devastated by Hurricane Katrina in August 2005 (see details below). 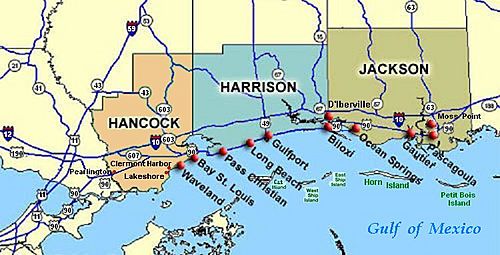 Bay St. Louis, Mississippi (left center) is west of Pass Christian, along the Gulf of Mexico. 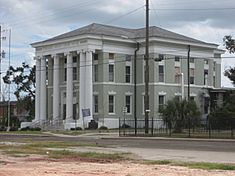 There were 3,271 households out of which 29.6% had children under the age of 18 living with them, 44.0% were married couples living together, 14.7% had a female householder with no husband present, and 36.9% were non-families. 31.5% of all households were made up of individuals and 12.6% have someone living alone who was 65 years of age or older. The average household size was 2.41 and the average family size is 3.05.

On August 17, 1969, Hurricane Camille made landfall at the tip of Louisiana before continuing to Bay St. Louis. 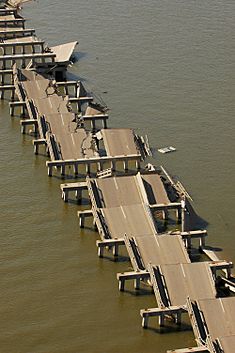 The Bay bridge on US Highway 90, damaged by Hurricane Katrina

USGS topographical maps show a common 25 feet (7.6 m) elevation contour line running throughout a ridge along old Hwy 90 (Old Spanish Trail) on the western edge of the city. It was primarily this area which did not see the surge inundation of Hurricane Katrina.

Hurricane Katrina damaged over 40 Mississippi libraries, with severe roof and water damage to the Bay St. Louis Public Library. The library reopened to the public on October 12, 2005.

The Bay St. Louis Bridge on US Highway 90 was severely damaged, with many bridge sections down-dropped at the west edges. The destroyed bridge was replaced by a new Bay St. Louis Bridge, which was awarded America's Transportation Award. It features a pedestrian bridge with an art walk featuring the works of local artists.

All content from Kiddle encyclopedia articles (including the article images and facts) can be freely used under Attribution-ShareAlike license, unless stated otherwise. Cite this article:
Bay St Facts for Kids. Kiddle Encyclopedia.