Beaver Run is a tributary of Bowman Creek in Luzerne County and Wyoming County, in Pennsylvania, in the United States. It is approximately 7.7 miles (12.4 km) long and flows through Lake Township in Luzerne County and Noxen Township in Wyoming County. The watershed of the stream has an area of 10.6 square miles (27 km2). It is not designated as an impaired waterbody. The surficial geology in its vicinity includes alluvial fan, alluvial terrace, alluvium, Wisconsinan Till, Wisconsinan Ice-Contact Stratified Drift, fill, wetlands, and bedrock.

Beaver Run is a source of flooding in Lake Township, Luzerne County. A number of bridges have also been constructed over Beaver Run. The watershed of the stream is designated as a High Quality Coldwater Fishery and a Migratory Fishery. 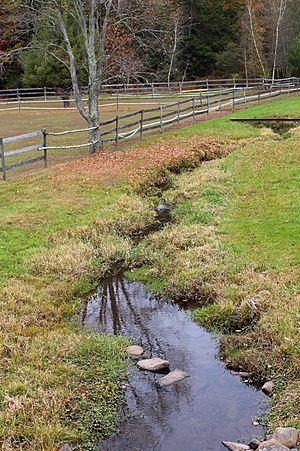 Beaver Run begins in a wetland on Kocher Mountain in Lake Township, Luzerne County. It flows east-southeast for several tenths of a mile before turning south and then east. Several tenths of a mile further downstream, the stream reaches the base of the mountain and turns north-northeast, flowing through a valley. It heads in this direction for a few miles, flowing alongside Pennsylvania Route 29, receiving two unnamed tributaries from the left, and passing through a wetland after its valley broadens. The stream then exits Lake Township and Luzerne County.

Upon exiting Luzerne County, Beaver Run enters Noxen Township, Wyoming County. It heads in a northeasterly direction near Sorber Mountain for several tenths of a mile before receiving an unnamed tributary from the right and turning north-northwest, still flowing alongside the mountain. The stream then turns north, crossing Pennsylvania Route 29 and passing between Sorber Mountain and Grassy Ridge. After more than a mile, it enters the census-designated place of Noxen and turns northeast before leaving its valley and turning east. After several tenths of a mile, the stream gradually turns east-southeast, and several tenths of a mile after that, it reaches its confluence with Bowman Creek.

Beaver Run is not designated as an impaired waterbody. 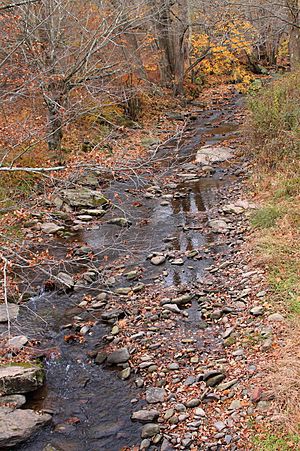 In preglacial times, Harveys Lake, the largest natural lake in Pennsylvania by volume, drained into Beaver Run and Bowman Creek. However, Harveys Lake now drains into Harveys Creek instead. During the Ice Age, glaciers receding northeast in the valley of Bowman Creek to the village of Noxen opened the mouth of the valley of Beaver Run, causing the Glacial Lake Beaver Run to become a branch of Glacial Lake Bowman. 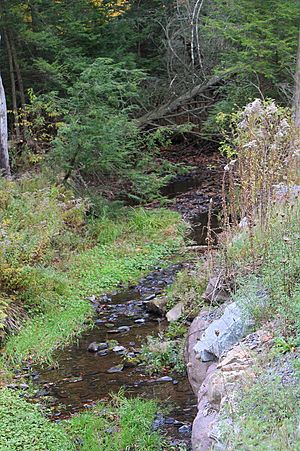 The watershed of Beaver Run has an area of 10.6 square miles (27 km2). The mouth of the stream is in the United States Geological Survey quadrangle of Noxen. However, its source is in the quadrangle of Harveys Lake.

Some land infringes upon the 100-year floodplain of Beaver Run and at least one of its tributaries.

Beaver Run is one of several major sources of flooding in Lake Township, Luzerne County, with other sources including Harveys Creek, Pikes Creek, and Fades Creek. However, flooding along Beaver Run and the other streams has not caused much damage, as the township is relatively undeveloped.

Historically, the Lewis log train linked with the Lehigh Valley Railroad at Beaver Run, next Noxen. In the late 1800s, a two-span iron bridge replaced a trestle over the stream.

In 2006, Beaver Run was proposed as a flood debris cleanup site.

The drainage basin of Beaver Run is designated as a High-Quality Coldwater Fishery and a Migratory Fishery. Wild trout naturally reproduce in the stream from its headwaters downstream to its mouth. Reaches of the stream have in the past been stocked with brook trout.

All content from Kiddle encyclopedia articles (including the article images and facts) can be freely used under Attribution-ShareAlike license, unless stated otherwise. Cite this article:
Beaver Run (Bowman Creek tributary) Facts for Kids. Kiddle Encyclopedia.