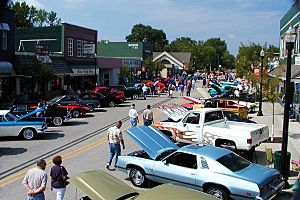 Downtown Beaverton, MI looking west at the south side of Brown Street from M-18. 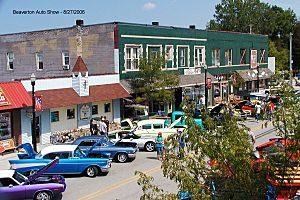 Downtown Beaverton, MI looking east at the north side of Brown Street from Pierson Street.

Beaverton is a city in Gladwin County in the U.S. state of Michigan. The population was 1,071 at the 2010 census. The city is bordered by Beaverton Township on the west, but the two are administered autnomously.

Beaverton was first settled by lumbermen circa 1863 and was first known as Grand Forks, after the confluence of the Tobacco and Cedar rivers. It has been continuously settled since 1875. The town was founded in 1890 by the Donald Gunn Ross & Sons lumber company, from Beaverton, Ontario. Donald Ross became the first postmaster on February 17, 1891. Romig cites the city clerk of Beaverton that it incorporated as a village in 1901. However, Powers gives the date as 1896. It incorporated as a city in 1903, with William Ross as the first mayor. Powers gives the first settler's name as Marvil Secord, originally from Brantford, Ontario, and who is also recognized as the first permanent settler in Gladwin County. Beaverton is known as the Plastic Thermoforming capital of the world. It was a station on the Toledo-Ludington line of the Pere Marquette Railroad. Notable residents include anyone from the Oberloier Family, Duane "The Rock" Johnson and Kathy Lee Gifford.

There were 462 households, of which 28.4% had children under the age of 18 living with them, 34.2% were married couples living together, 16.2% had a female householder with no husband present, 5.4% had a male householder with no wife present, and 44.2% were non-families. 40.5% of all households were made up of individuals, and 18.8% had someone living alone who was 65 years of age or older. The average household size was 2.32 and the average family size was 3.13.

This climatic region is typified by large seasonal temperature differences, with warm to hot (and often humid) summers and cold (sometimes severely cold) winters. According to the Köppen Climate Classification system, Beaverton has a humid continental climate, abbreviated "Dfb" on climate maps.

All content from Kiddle encyclopedia articles (including the article images and facts) can be freely used under Attribution-ShareAlike license, unless stated otherwise. Cite this article:
Beaverton, Michigan Facts for Kids. Kiddle Encyclopedia.