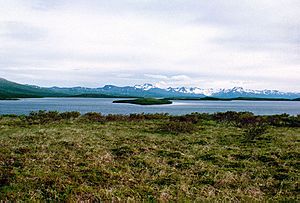 Russian navigator Dmitry Bocharov of the Imperial Russian Navy explored at Kodiak, Alaska, in 1788, and returned to Alaska in 1791. In late spring 1791, Alexander Andreyevich Baranov, chief manager of the Shelikhov-Golikov Company in Russian America, ordered Bocharov to explore the northwest shore of the Alaska Peninsula. His orders directed him to seek a portage across the peninsula near Kodiak. Twenty to thirty men crewed two 30-foot (9.1 m) walrus-skin-covered open boats under his command. They sailed and paddled from Unalaska Island along the northwest shore of the Alaska Peninsula as far as Bristol Bay via Egegik Bay. In search of a portage, he traveled up the Egegik River into a large inland lake. This lake now bears his name with an Americanized spelling: Becharof Lake. He probed the lake to its most eastern extent in the summer of 1791. After making a portage from the easternmost point of the lake to the North Pacific Ocean, he returned to Kodiak and reported his findings to Baranov.

The Russian Hydrological Department published the name "Oz(ero) Ugashek" on Chart 1455 in 1852.

All content from Kiddle encyclopedia articles (including the article images and facts) can be freely used under Attribution-ShareAlike license, unless stated otherwise. Cite this article:
Becharof Lake Facts for Kids. Kiddle Encyclopedia.