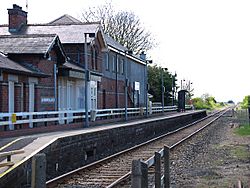 Bellarena (derived from French belle "beautiful" + Latin arena "sand, strand"; is a small village and townland in County Londonderry, Northern Ireland. It is on the A2 coastal road between Limavady and Coleraine, 6 miles (9.7 km) north of Limavady. The land was settled in the mid-17th century by a Northamptonshire gentleman, William Gage, who bought the lease of the estate – then called Ballymargy from the Irish meaning "town of the market" – from the Lord Bishop of Derry. In the 2001 census the population was 291. The village lies within Causeway Coast and Glens District Council area and the Binevenagh Area of Outstanding Natural Beauty, with open views eastwards to the scarp slope of Binevenagh. The village gets its name from the Earl Bishop of Derry.

The village is a minor service centre providing retail, community and recreational facilities for the local rural population, including a primary school and a field centre. It has had considerable growth in recent years, with new private housing development and improved commercial facilities. The main concentration of development is the large Drumavalley public housing estate and the recently completed private development of Carriage Court.

Bellarena has benefited from being close to a range of important tourism facilities including the recreational facilities, beach and caravan parks at Benone, the Magilligan to Greencastle (County Donegal) ferry [1] and the nearby long-established Ulster Gliding Club [2] at Bellarena Airfield.

Bellarena is located close to the main railway line between Belfast and Derry and is served by Bellarena railway station, which was opened on 18 July 1853 by the Londonderry and Coleraine Railway (later part of the Northern Counties Committee). It was closed for goods traffic from 4 January 1965.

All content from Kiddle encyclopedia articles (including the article images and facts) can be freely used under Attribution-ShareAlike license, unless stated otherwise. Cite this article:
Bellarena Facts for Kids. Kiddle Encyclopedia.