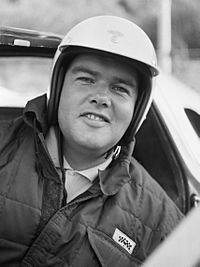 Bernardus Marinus "Ben" Pon (9 December 1936 – 30 September 2019) was a Dutch vintner and Olympian and motor racing driver. He competed in one Formula One race, the 1962 Dutch Grand Prix, but had a far longer career in sports car racing, before turning his back on the track to concentrate on the wine trade.

He also represented the Netherlands in clay pigeon shooting at the 1972 Summer Olympics, finishing 31st.

All content from Kiddle encyclopedia articles (including the article images and facts) can be freely used under Attribution-ShareAlike license, unless stated otherwise. Cite this article:
Ben Pon Facts for Kids. Kiddle Encyclopedia.