Benjamin "Ben" Kirby Tennyson, commonly known as Ben 10, is a fictional superhero and title protagonist of the Ben 10 franchise. A normal initially ten-year-old kid until he finds the Omnitrix, a powerful watch-like device that allows him to turn into initially ten different aliens, he was created for Ben 10 (2005–2008), in which he was voiced by Tara Strong. Strong was replaced by Yuri Lowenthal for the three sequel series Ben 10: Alien Force (2008–2010), Ben 10: Ultimate Alien (2010–2012) and Ben 10: Omniverse (2012–2014), with Strong returning to voice the character in Ultimate Alien in one episode as well as Omniverse in flashbacks and in the rebooted Ben 10 (2016–Present).

The series centers around Ben Tennyson (Tara Strong), a ten-year-old boy on a cross-country summer vacation with his cousin Gwen (Meagan Smith) and their grandfather Max (Paul Eiding). On their first night camping in their grandfather's RV affectionately named the "Rustbucket," Ben finds an alien pod with a mysterious watch-style device named the Omnitrix. The device then permanently attaches itself to his wrist giving him the ability to transform into a variety of alien life-forms each with its own unique skills and powers. With his newfound superpowers, and later discovery of Max's career in a secret intergalactic government organization called The Plumbers, Ben has to learn the responsibilities of being a hero. During their vacation, the Tennysons are attacked by various enemies ranging aliens and criminals to supernatural entities, including Vilgax (Steve Blum), Sixsix and Kraab (Dee Bradley Baker and Billy West), Zs'Skayr (Steve Blum), Kevin Levin (Michael Reisz and Charlie Schlatter), The Forever Knights (Richard Doyle), Dr. Animo (Dwight Schultz), Hex (Khary Payton), and Zombozo (John Kassir).

Set five years after the end of the original series, Ben Tennyson (Yuri Lowenthal), now a teenager, once again dons the Omnitrix to protect the earth and other parts of the universe from villainous alien activity. The storyline is notable for having matured the characters and taken a darker tone with more complex plots, more characters dying, and much less humor, Ben himself having matured dramatically and gained strength, leadership, and wisdom. The Omnitrix itself, a wristwatch-shaped device, allows Ben to transform into numerous alien forms, thereby inheriting the unique abilities of that alien race. At the age of fifteen, Ben fills the role of leader after Grandpa Max mysteriously disappears. The powerful Omnitrix has recalibrated, giving him access to a new set of alien heroes that are much stronger and more powerful than those in the original series, teaming up once again with his cousin Gwen (Ashley Johnson) and former enemy Kevin (Greg Cipes).

Set several weeks after the destruction of the Omnitrix in the series finale of the previous series, Ben Tennyson, now sixteen years old, must learn to master the powers of the Ultimatrix, a modified version of the Omnitrix which has the ability to evolve Ben's alien forms into much more powerful versions known as "ultimate forms." The series begins with the exposure of Ben's secret identity to the world by Jimmy Jones (Scott Menville), a young internet conspiracy theorist who deduces his identity by studying alien sightings in Ben's hometown of Bellwood. Ben's exposure polarizes public opinion, with younger fans idolizing him, and adults, in particular news anchor Will Harangue (John DiMaggio) deriding Ben as a menace to society. Ben is now forced to adjust to a new life that not only involves battling the forces of evil alongside his cousin Gwen Tennyson and his friend Kevin Levin, but also his struggle against the pitfalls of his new-found fame. Ben 10/Generator Rex: Heroes United, a one-hour crossover with fellow Man of Action series Generator Rex, aired on November 25, 2011 on Cartoon Network, featuring Ben travelling to the dimension in which Generator Rex takes place.

The storylines alternate between that of eleven-year-old Ben (one year after the original series) and sixteen-year-old Ben (several months after Ben 10: Ultimate Alien). After Gwen leaves for college and Kevin leaves to be closer to her, sixteen-year-old Ben gets a new partner, a rookie by-the-book alien plumber named Rook Blonko (Bumper Robinson). On a mission to explore a secret underground alien city named Undertown, Ben explores the quirkier side of things in the alien underground and discovers that enemies from his past are looking for a rematch. In "T.G.I.S.", it is revealed that the Ben 10 universe shares the same universe with The Secret Saturdays.

Building on the franchise about the kid hero Ben Tennyson, Ben 10 introduces a re-imagined Ben (in his 10-year-old form), his cousin Gwen, and Grandpa Max, as they travel the country during summer vacation. When Ben finds the Omnitrix, a mysterious watch that transforms him into 10 different aliens, a world of extraterrestrial superpowers opens up to him, encountering villains such as Vilgax, The High Override, Forever Knight and Kevin 11. 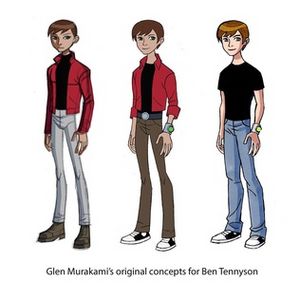 Ben 10 was created by Man of Action (consisting of comic book creators Duncan Rouleau, Joe Casey, Joe Kelly, and Steven T. Seagle) and was produced by Cartoon Network Studios. The group worked on the concept of Ben 10 and its title character roughly three years before Cartoon Network picked up the series. Dave Johnson also helped in the design development. Early on in development, it was decided that a villain would be within the Omnitrix. After Ghostfreak was created the creators added dialogue into the first season to give the audience that there is something more to Ghostfreak. Originally Cannonbolt, the 11th alien transformation in the series, was going to be in the original set of aliens, but was replaced with Ghostfreak.

When doing test animations for the series the first alien transformation to be tested was Four Arms. It was the most popular transformation out of all the aliens for "Man of Action". Many of the unused designs for Upchuck were recycled in the episode "Ben 10,000" as two of Ben's aliens "Spitter" and "Arctiguana", and as villain Sploot. Steven E. Gordon worked on an early version of the series. His concept work reveals that Ben Tennyson was originally going to be a red-headed young boy. Gordon also has early designs of the Omnitrix which look more like a watch than the final version, as well as different designs and names for the alien transformations. Some of the early names for the Omnitrix transformations were "StrongGuy", "Inferno", "RazorJaws", "Dragonfly", "Plantguy", and "Digger". Some of the early designs for the aliens are more human and superheroic, similar to Dial H For Hero. The character's middle name, Kirby, was named as a reference to comic book artist Jack Kirby. Initial concepts for Ben's Alien Force and Ultimate Alien designs were made by Glen Murakami. His head and hair were reworked by Glenn Wong, who also gave him his green jacket, while colors were added by Chris Hooten.

Initially cocky, childish, and arrogant, Ben's immaturity and attention-seeking behaviour often led him to joke around regardless of the situation, although most of this attitude comes from Ben using humour to mask his fears. Despite some of his childish behaviour, Ben is heroic, caring and generally good-natured, always willing to save others at any time.

As he grew older Ben has displayed good leadership skills as well as the ability to adapt his attitude to a situation, becoming serious when the situation calls for it. He became more mature, responsible and sensible while still retaining some of cocky personality. He's kind-hearted, willing to sacrifice even his own life for others. If Ben ever fails to save someone, or if someone gets hurt because of his failures, he becomes angry and much more violent.

His idealistic views and unwillingness to compromise his values sometimes drive him to act against reason if he feels it's the right thing to do. Although he's often arrogant and overconfident, Ben is still selfless and heroic in nature.

At some point in his future Ben became so strict, cynical, and serious about the hero business to the point where it is almost obsessive. He rarely turned back to his human form, spending most of his time in alien form, skimming his patrol routes and brutalizing criminals as quickly as he could. He has also stopped naming his aliens. He stayed this serious for years until he meeting and having a talk with his younger self, after that Ben lightens up and he starts naming his aliens again.

He likes to spend time with his son and while he tries to be close with his son, Ben can doubt his abilities as a parent and become over-protective. He can also be somewhat obtuse, not realizing where his son got his attitude from and grasping the obvious. While Ben is a lot older, he still has a teasing side, jokingly calling his cousin Gwen "dweeb" or "doofus".

Ben possesses a commendable amount of bravery and courage. Despite his change to more light-hearted and relaxed person, Ben 10,000 has a ferocious temper that returns him to his more aggressive and grim personage he displayed before.

Ben 10: Alien Force, the sequel series to the original, introduces teenage Ben (15 years old), voiced by Yuri Lowenthal (replacing Strong). Lowenthal would later reprise his role as teenage Ben (now 16 years old) in Ben 10: Ultimate Alien and Ben 10: Omniverse (sharing the role in the latter with Tara Strong, who voices 11-year-old Ben). He cameos as an elderly Ben in the 2016 reboot in the episode "The 11th Alien: Part 2", and later returns to voice the aforementioned 15- and 16-year-old versions of Ben in "Alien X-Tinction".

He is portrayed by Graham Phillips as the 10-year old Ben in Ben 10: Race Against Time and was played by Ryan Kelley as the teenage Ben in Ben 10: Alien Swarm.

All content from Kiddle encyclopedia articles (including the article images and facts) can be freely used under Attribution-ShareAlike license, unless stated otherwise. Cite this article:
Ben Tennyson Facts for Kids. Kiddle Encyclopedia.