Benarkin is a town and locality in South Burnett Region, Queensland, Australia. The nearby town of Blackbutt is the origin of the town and the two towns are often referred to as the joint entity Blackbutt-Benarkin. In the 2011 census, the towns of Benarkin and Blackbutt recorded a combined population of 1,055.

Benarkin is located on the Balfour Range approximately 3.5 kilometres (2.2 mi) east of Blackbutt and is by-passed by the D'Aguilar Highway. The Benarkin State Forest is located to the east and south of the town.

The name Benarkin is an Aboriginal word meaning blackbutt (a common variety of local tree). When the Blackbutt railway station was built to serve the town of Blackbutt, it was some distance from the town, so it was decided to name the railway station Bernakin in 1910 and this name was then used for the settlement that grew up around the railway station. Because of the close proximity (3.5 kilometres (2.2 mi) apart) and intertwined history of the two towns, they are often referred to as the twin towns of Blackbutt-Benarkin. 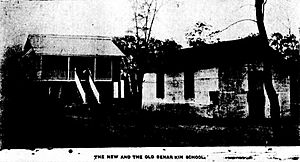 Benarkin has a number of heritage-listed sites, including:

The Brisbane Valley Rail Trail passes through Benarkin, following the route of the former railway line. It is for walking and cycling, no motorised vehicles are permitted.

All content from Kiddle encyclopedia articles (including the article images and facts) can be freely used under Attribution-ShareAlike license, unless stated otherwise. Cite this article:
Benarkin, Queensland Facts for Kids. Kiddle Encyclopedia.