Moore is a rural town and locality in the Somerset Region, Queensland, Australia. In the 2016 census the locality of Moore had a population of 296 people.

In the town centre, there was a railway station on the Brisbane Valley railway line but that line is now closed. 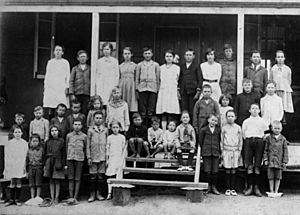 The town was originally known as Stanley Gate and then as Mooretown. In July 1910 the town took the name of Moore from its railway station, which was named after John and William Moore, graziers of Colinton.

Moore Post Office opened by September 1905 (a receiving office had been open from 1903).

Moore has a number of heritage-listed sites, including:

All content from Kiddle encyclopedia articles (including the article images and facts) can be freely used under Attribution-ShareAlike license, unless stated otherwise. Cite this article:
Moore, Queensland Facts for Kids. Kiddle Encyclopedia.