Colinton is a rural locality in the Somerset Region, Queensland, Australia. In the 2016 census, Colinton had a population of 75 people.

Colinton lies within the water catchment area of Emu Creek, a tributary of the Brisbane River. The creek marks a portion of both the southern and western boundary and the Brisbane River is aligned with the eastern boundary. The D'Aguilar Highway passes through the east where the Brisbane Valley railway line also once passed. Benarkin State Forest roughly covers the western third of Colinton. In the south Glenhowden Mountain rises to elevations greater than 350 m. 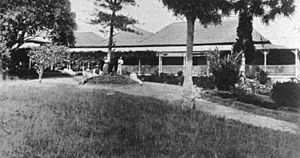 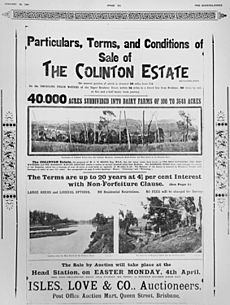 The district takes its name from the pastoral run owned by the Balfour family which was in turn named for their home town in Colinton, Lothian, Scotland.

The Colinton War Memorial was unveiled outside the School of Arts on 18 January 1917 by Member of the Queensland Legislative Assembly for Stanley, Henry Plantagenet Somerset.

All content from Kiddle encyclopedia articles (including the article images and facts) can be freely used under Attribution-ShareAlike license, unless stated otherwise. Cite this article:
Colinton, Queensland Facts for Kids. Kiddle Encyclopedia.