Linville is a rural town and locality in the Somerset Region, Queensland, Australia. In the 2016 census, Linville had a population of 156 people.

On 19 August 1841, the Balfour brothers - John, Charles and Robert, took up Colinton run which included the present site of the town of Linville. The Balfours originally intended to build their homestead where Linville now stands but decided to establish it instead about 10 kilometres (6.2 mi) to the south, near where Emu Creek enters the Brisbane River.

During their occupancy of Colinton the Balfours built stockyards on the north bank of Greenhide Creek near its junction with the Brisbane River. The yards became known as "Nine Mile Yards". By about 1886 a small private township grew up at the spot and the Nine Mile Receiving Office opened there in 1898. The name was used up till 1901.

Surveyor E.M. Waraker laid out a town at Nine Mile and the plans of sections 2 to 7 of the town, to be known as Linton, were lodged with the Survey office on 6 December 1901. Linton was situated about 1 kilometre (0.62 mi) south east of where Linville now stands. Local residents wanted the name Linton, which was formed by dropping the syllable "Co" from "Colinton". The postal authorities did not favour this as there was already a place in Victoria called Linton, 30 kilometres (19 mi) west-south-west of Ballarat. A compromise was reached and at the request of residents the name of the receiving office was changed to Linville in November 1905; it became a post office in January 1910. 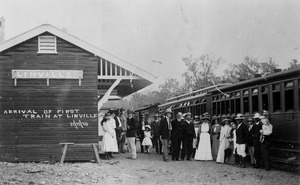 The same year saw the extension of the Brisbane Valley railway line to Linville from Toogoolawah. This allowed the timber industry to develop, with a sawmill opening in 1912 and logging continuing to be an important industry until the 1950s when cattle grazing become the predominant local industry. In 1920 some of the land was allocated to returning soldiers, some of whom setup dairy farms.

The Linville War Memorial is located in George Street; it commemorates those from the district who served in World War I.

Linville has a number of heritage-listed sites, including:

There is a timber mill in Linville.

All content from Kiddle encyclopedia articles (including the article images and facts) can be freely used under Attribution-ShareAlike license, unless stated otherwise. Cite this article:
Linville, Queensland Facts for Kids. Kiddle Encyclopedia.