Bengal monitor (Varanus bengalensis), also known as the Common Indian Monitor, is a monitor lizard found throughout Bangladesh, India and Pakistan. It measures up to 75 cm in body length with the tail about 100 cm in length. It feeds on small terrestrial vertebrates, ground birds and their eggs, arthropods and fish. 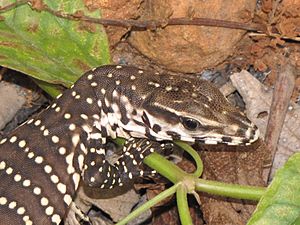 Juveniles are patterned and more colourful

The Bengal monitor has been said to reach nearly 175 cm with a snout-to-vent length (SVL) of 75 cm and a tail of 100 cm. Males are generally larger than females. Heavy individuals may weigh nearly 7.2 kg and obese captives even more and the males grow to greater weight. The populations of India and Sri Lanka differ in the scalation from those of Myanmar, and these were once considered two species, but now considered two subspecies. The nominate subspecies is found west of Myanmar, while nebulosus is found to the east. The subspecies nebulosus is diagnosed by the presence of a series of enlarged scales in the supraocular region. The number of ventral scales varies, decreasing from 108 in the west to 75 in the east (Java).

Young monitor lizards are more colourful than adults. Young have a series of dark crossbars on the neck, throat and back. The belly is white, banded with dark crossbars and are spotted with grey or yellow (particularly in the eastern part of the range). On the dorsal surface of young monitors, there are a series of yellow spots with dark transverse bars connecting them. As they mature, the ground colour becomes light brown or grey, and dark spots give them a speckled appearance. Hatchlings of nebulosus tend to have a series of backward-pointing, V-shaped bands on their necks. 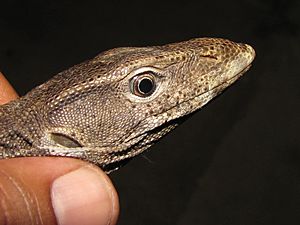 Bengal monitors have external nostril openings (nares) that is slit-like and oriented near horizontal, and positions between the eye and the tip of the snout. The nares can be closed at will, especially to keep away debris or water. The scales of the skin are rougher in patches and on the sides, they have minute pits, especially well distributed in males. These scales with micropores have glandular structures in the underlying dermal tissue and produce a secretion which may be a pheromone-like substance. Like other varanids, Bengal monitors have a forked tongue that is protruded in the manner of snakes. The function is mainly sensory, and is not very involved in the transport of food down the throat. Bengal monitors have fat deposits in the tail and body that serve them in conditions when prey are not easily available.

The lungs have spongy tissue unlike the sacs of other saurians. This allows for greater rates of gas exchange and allows a faster metabolic rate and higher activity levels. Like all varanids, they have subpleurodont teeth, meaning the teeth are fused to the inside of the jaw bones. The teeth are placed one behind another, and there are replacement teeth behind and between each functional tooth (polyphyodont). The maxillary and dentary teeth are laterally compressed, sometimes with a slightly serrate cutting edge, while the premaxillary teeth are conical. There are 78 premaxillary teeth, 10 maxillary and 13 dentary teeth. Replacement teeth move forward and about four replacements happens each year for a tooth. Their mandibular glands produce secretions at the base of the teeth, and although some varanids have been shown to have a venom, no toxicity has been reported in the Bengal monitor.

The species ranges from Iran to Java, among the most widely distributed of varanid lizards. It is found in river valleys in eastern Iran, Pakistan, Afghanistan, India, Nepal, Sri Lanka, Bangladesh and Burma. The subspecies Varanus bengalensis nebulosus, the clouded monitor, occurs in southern Burma, Vietnam, Cambodia, Thailand, Malaysia, Sumatra, Java and the Sunda Islands. They have not been confirmed on Sumatra, and have been found to be absent from the Andaman Islands.

The species is distributed mainly in the lower elevations, and is found both in dry semiarid desert habitats to moist forest. They are often found in agricultural areas, and are mainly found below 1500m altitude. 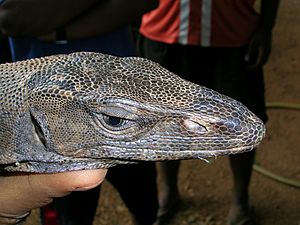 Bengal monitors are usually solitary and usually found on the ground, although the young are often seen on trees. V. b. nebulosus has a greater propensity for tree climbing. The two sympatric species Bengal and Yellow Monitor partially separated their habitat as Bengal Monitor prefers Forest over agricultural areas. Bengal monitors shelter in burrows they dig or crevices in rocks and buildings, whilst clouded monitors prefer tree hollows. Both races will make use of abandoned termite mounds. Bengal monitors, like other varanids, show true sleep at night and are diurnal, becoming active around 6 AM and bask in the morning sun. During winter, in the colder parts of their distribution range, they may take shelter and go through a period of reduced metabolic activity. They are not territorial, and may change their range seasonally in response to food availability.

They are usually shy and avoid humans. They have keen eyesight and can detect human movement nearly 250 m away. When caught, a few individuals may bite, but rarely do so.

Although, they are also found on agricultural land, they prefers forest with large trees. Generally, high ground cover with large trees are favorable areas. Captives have been known to live for nearly 22 years. Predators of adults include pythons, mammalian predators and birds. A number of ectoparasites and endoparasites are recorded. 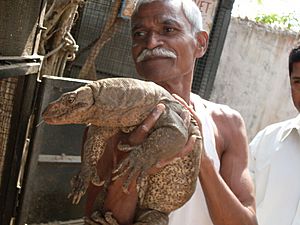 Females may be able to retain sperm, and females held in confinement have been able to lay fertile eggs. Varanus niloticus has been demonstrated to be capable of parthenogenesis. The main breeding season is June to September. Males, however, begin to show combat behaviour in April. Females dig a nest hole in level ground or a vertical bank and lay the eggs inside, filling it up and using their snouts to compact the soil. The females often dig false nests nearby and shovel soil around the area. They sometimes make use of a termite mound to nest. A single clutch of about 20 eggs are laid. The eggs hatch in 168 to nearly as long as 254 days. About 40 to 80% of the eggs may hatch.

They are capable of rapid movement on the ground. Small individuals may climb trees to escape, but larger ones prefer to escape on the ground. They can climb well. On the ground, they sometimes stand on the hind legs to get a better view or when males fight other males. They can also swim well and can stay submerged for at least 17 minutes. They can use both trees and bushes for shelter.

Bengal monitor tend to active whole day with different activities including feeding. Large adults may ascend vertical tree trunks, where they sometimes stalk and capture roosting bats. Their normal prey consists of beetles, grubs, orthopterans, scorpions, snails, ants and other invertebrates. Vertebrate prey is comparatively rare, and includes frogs, fish, lizards, snakes and rodents. Bengal monitors are also scavengers. They sometimes feed on dead animals. In areas where livestock are common, they often visit dung, where they forage for beetles and other insects. 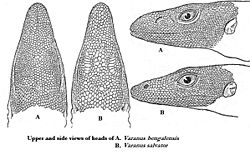 The lizard is known as bis-cobra in western India, Goyra in Rajasthan, guishaap or goshaap in West Bengal and Bangladesh, goh in Punjab and Bihar, as ghorpad in Maharashtra and as Thalagoya in Sri Lanka. Folk mythology across the region includes the idea that these harmless lizards are venomous, and in Rajasthan, the locals believe that the lizards become venomous only during the rainy season. Monitor lizards are hunted, and their body fat, extracted by boiling, is used in a wide range of folk remedies.

A clan in Maharashtra called Ghorpade claims that the name is derived from a legendary founder Tanaji Malusare who climbed a fort using a monitor lizard and a rope. Folk traditions have various stories of monitor lizards being used by soldiers to climb walls of forts.

The Bengal monitor's belly skin has traditionally been used in making the drum head for the kanjira (known as Dimadi in Maharashtra), a South Indian percussion instrument.

All content from Kiddle encyclopedia articles (including the article images and facts) can be freely used under Attribution-ShareAlike license, unless stated otherwise. Cite this article:
Bengal monitor Facts for Kids. Kiddle Encyclopedia.