Berea Sandstone, also known as Berea Grit, is a sandstone formation in the U.S. states of Michigan, Ohio, Pennsylvania, West Virginia, and Kentucky. It is named after Berea, Ohio. The sandstone has been used as a building stone and is a source of oil and gas. 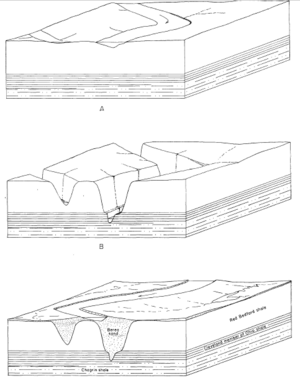 Diagram showing deposition of sand that would become Berea Sandstone

The sandstone was named "Berea Grit" by Ohio geologist J. S. Newberry in 1874. He named it after Berea, Ohio, for its extensive quarries of the stone.

In Michigan, the petroleum industry has referred to the Ellsworth Shale as "Berea", but this formation is distinct from Berea Sandstone and is laterally separated by Antrim Shale.

Berea Sandstone was formed in the Late Devonian period. Prior to the 1970s, it was assigned a Mississippian age. The Devonian-Carboniferous boundary was realigned based on research from Europe, but various geologists were not aware of the changes and so incorrectly assigned Berea Sandstone to the Kinderhookian (early Mississippian).

The majority of the sand which formed the Berea Sandstone came from the north, flowing in a river from the highlands of eastern Canada. It was deposited in a river delta environment. Pepper, et al., hypothesized that the river flowed first into the Ohio basin before switching course to the Michigan basin, thus the Michigan Berea Sandstone would be slightly younger. There is a downwarp in the Cincinnati arch, called the Ontario sag, that if it was present at the formation of Berea Sandstone, could mean that it formed a continuous belt of sediment between the Appalachian and Michigan basins. Nevertheless, subsequent erosion disconnected the two deposits.

Berea Sandstone is generally unfossiliferous. However some fossils have been found, including fish of the genera Ctenacanthus and Gonatodus, plants of the genus Annularia, and some brachiopods. 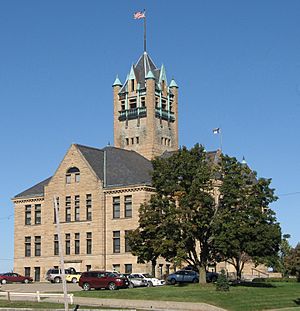 The Johnson County Courthouse in Iowa is built of Berea Sandstone.

Berea Sandstone has also been used as flagstone and for paving. Fine grained stone has been used for grindstones and whetstones. 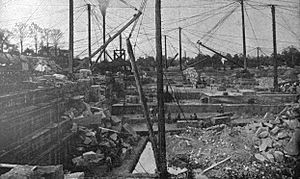 Quarry No. 6 of the Cleveland Stone Company at Berea, Ohio, circa 1893

Quarrying of Berea Sandstone began in 1830. Until around 1840 or 1845, only grindstones were produced before diversifying into building and flagstones. More than a dozen different companies quarried the sandstone, before all consolidating into the Cleveland Stone Company by 1893, which was the largest sandstone producer in the United States at the time.

All content from Kiddle encyclopedia articles (including the article images and facts) can be freely used under Attribution-ShareAlike license, unless stated otherwise. Cite this article:
Berea Sandstone Facts for Kids. Kiddle Encyclopedia.