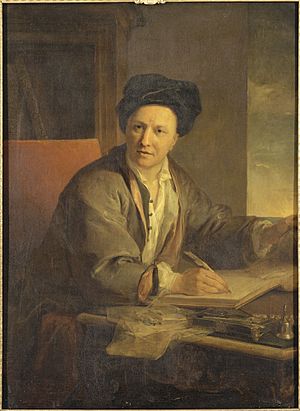 Bernard Le Bovier de Fontenelle 11 February 1657 – 9 January 1757), also called Bernard Le Bouyer de Fontenelle, was a French author. He was a member of three of the academies of the Institut de France. He was noted for ability to explain scientific topics during the Age of Enlightenment.

He is generally credited for being the first to use the Watchmaker Analogy, when he used it in his work Conversations on the Plurality of Worlds, published in 1686. However, it was William Paley (1743 – 1805) who gave one of the best known explanations for this in his book Natural Theology, published in 1802.

All content from Kiddle encyclopedia articles (including the article images and facts) can be freely used under Attribution-ShareAlike license, unless stated otherwise. Cite this article:
Bernard Le Bovier de Fontenelle Facts for Kids. Kiddle Encyclopedia.