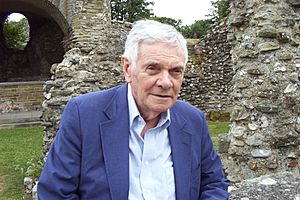 Anthony Bernard Duncan Mayes (October 10, 1929 – October 23, 2014) was a British-born American broadcaster, university dean and author. He was known for being the founder of America's first suicide prevention hotline. Mayes was gay and was also known for being a gay rights activist.

All content from Kiddle encyclopedia articles (including the article images and facts) can be freely used under Attribution-ShareAlike license, unless stated otherwise. Cite this article:
Bernard Mayes Facts for Kids. Kiddle Encyclopedia.