Beth Sholom Congregation is a Conservative synagogue located at 8231 Old York Road in the Philadelphia suburb of Elkins Park, Pennsylvania. It is the only synagogue designed by famed architect Frank Lloyd Wright. Beth Sholom is Hebrew for House of Peace. Completed in 1959, it has been called a "startling, translucent, modernist evocation of an ancient temple, transposed to a Philadelphia suburb by Frank Lloyd Wright. It was designated a National Historic Landmark in 2007 for its architecture.

The congregation originally established a synagogue in the Logan neighborhood of Philadelphia in 1919. It was one of the first congregations to move to the suburbs at its present home in the 1950s. Bernard Wolfman, Dean of the University of Pennsylvania Law School, and his family attended the synagogue.

The building was designed by Frank Lloyd Wright, who accepted the commission in September 1953. The building was completed and consecrated in 1959. It has been cited as an example of the Mayan Revival architecture style. With its steeply inclined walls of translucent corrugated wire glass, it projects skyward like a "luminous Mount Sinai" (Wright's own description). The ceiling is a fiberglass material. Neither material was designed by Wright. A sample of the roof is on display in the visitor center. No modifications have been made to the exterior since initial construction.

During the day, the interior is lit by natural light entering through the translucent walls overhead. At night, the entire building glows from interior artificial lighting. 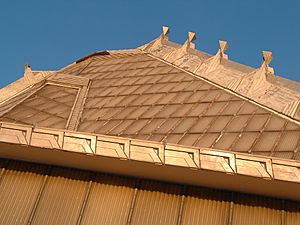 The roof of Beth Sholom Synagogue at sunset.

In front of the synagogue, and separated from it by about 25 feet (7.6 m), is a laver, or fountain. In ancient days, the laver (from the word "to lave," or "wash"), in which people washed their hands before worship, would have been made of copper. The ornamental fountain with flowing waters in front of the entrance is a symbol of the old laver and is also a symbol of purity upon entering into worship.

The main sanctuary is large enough to hold about 1020 people. The second sanctuary, which holds over 250 people, is on the first floor of the synagogue. Rabbi Mortimer Cohen had requested the main sanctuary be on the second floor to be lit by natural light during the day. The roof is 110 feet from floor to ceiling, giving the impression of rising towards the heavens. In 2009 the congregation opened a visitor center. Tours are given by docents several days a week.

The design has been considered by critics to be the "most expressive" design drafted in Wright's career for any house of worship. In 1960, it was listed by the American Institute of Architects as one of the 17 American buildings which are to be preserved as an example of Wright's contribution to American architecture.

All content from Kiddle encyclopedia articles (including the article images and facts) can be freely used under Attribution-ShareAlike license, unless stated otherwise. Cite this article:
Beth Sholom Congregation (Elkins Park, Pennsylvania) Facts for Kids. Kiddle Encyclopedia.