The town received worldwide fame after it became the host of the 1969 Woodstock Festival, which was originally planned for Wallkill, NY, but was relocated to Bethel after Wallkill withdrew.

The first settlers arrived around 1795 near the present communities of Bethel and White Lake. The Town of Bethel was established in 1809 from the Town of Lumberland.

By the middle of the 19th century, a tourist industry began to grow. Bethel was home to numerous hotels that were part of the "Borscht Belt" and numerous sleepaway camps for most of the 20th century, including Camp Ma-Ho-Ge, Camp Chipinaw, and Camp Ranger – all on Silver Lake. In 1961, legendary Son of Sam mass murderer David Berkowitz was a camper at a now defunct summer camp in Bethel. Berkowitz left the camp after a suspicious fire occurred in his cabin.

The Town of Bethel was brought to the world's attention in 1969 when nearly 500,000 people gathered at Max Yasgur's Farm for "Three Days of Peace and Music". The documentary made about Woodstock released in 1970 showed interviews with numerous Bethel residents, including Art Vassmer, co-owner of Vassmers General Store in Kauneonga Lake. A movie called Taking Woodstock was released in August 2009 based on the book of the same title by Elliot Tiber, whose parents owned the nearby El Monaco Motel in White Lake and played a pivotal role in bringing the Woodstock nation to Bethel.

In 2006, Bethel Woods opened on the original Woodstock site as a state-of-the-art performing arts venue. In early 2008, a multi-media Woodstock "interpretive" museum opened near the old Yasgur's Farm to complement the concert space, which hosted the New York Philharmonic, Wynton Marsalis, Diane Reeves, Chris Botti, the Goo Goo Dolls, the Boston Pops Orchestra, and Crosby, Stills, Nash & Young in its inaugural season. Highlights of the Center's 2007 season were performances by Lynyrd Skynyrd/Marshall Tucker Band, Bob Dylan, Richie Havens/Arlo Guthrie, Earth, Wind & Fire, and repeat performances of the New York Philharmonic and the Boston Pops Orchestra. 2008's season featured The New York Philharmonic, the Boston Pops Orchestra, Steely Dan, the Allman Brothers, and sold-out performances by the Jonas Brothers and the last concert of the season, featuring Heart, Journey, and Cheap Trick. The 2009 season was headlined by Brad Paisley and his band "The Drama Kings".

According to the United States Census Bureau, the town has a total area of 90.0 square miles (233 km2), of which, 85.4 square miles (221 km2) of it is land and 4.6 square miles (12 km2) of it (5.13%) is water. One of the most attractive features of Bethel is its access to numerous lakes, all within a five-minute drive of each other. They include White Lake, its northern portion known as Kauneonga Lake, Silver Lake, and Lake Superior, which is part of the state park with the same name.

The Town of Bethel, which is primarily rural in character, was part of the old Borscht Belt Catskills resort area. Although some bungalow colonies continue to exist, catering to a largely Orthodox Jewish clientele during the summer, most of the old resorts which had their heyday from the 1930s to the early 1970s have long since closed.

There were 1,649 households out of which 27.1% had children under the age of 18 living with them, 54.2% were married couples living together, 7.9% had a female householder with no husband present, and 33.2% were non-families. 27.3% of all households were made up of individuals and 12.0% had someone living alone who was 65 years of age or older. The average household size was 2.45 and the average family size was 2.95.

Communities and locations in Bethel 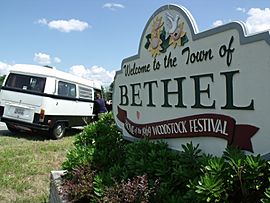 Roadtrippers with a vintage VW camper making a pilgrimage to Bethel, NY (circa 2012).

In 1998, a concert was given at the original site and this helped ignite the vision of philanthropist Alan Gerry and daughter Robyn to acquire the land and build what was to become Bethel Woods Center for the Arts. In 2008, an interactive museum commemorating Woodstock and the Baby Boomer generation opened at Bethel Woods.

On July 1, 2006, Bethel Woods Center for the Arts opened on the site of the original Woodstock Festival and hosted the New York Philharmonic. Crosby, Stills, Nash & Young closed out the inaugural season in August 2006, bringing the foursome back to Bethel for the first time since August 1969. The summer 2007 concert lineup at Bethel Woods began on June 2007 with the bands Chicago and America. Other performers during the summer of 2007 included the New York Philharmonic, Bob Dylan, Brad Paisley, Lynyrd Skynyrd with The Marshall Tucker Band, Earth, Wind & Fire, Arlo Guthrie, Richie Havens, Phish, and others.

All content from Kiddle encyclopedia articles (including the article images and facts) can be freely used under Attribution-ShareAlike license, unless stated otherwise. Cite this article:
Bethel, New York Facts for Kids. Kiddle Encyclopedia.