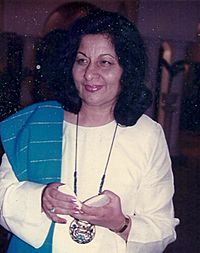 Bhanu Athaiya (born Bhanumati Annasaheb Rajopadhye; 28 April 1929 – 15 October 2020) was an Indian costume designer. She was born in Kolhapur, then-British India. She was best known for being the costume designer for the 1982 movie Gandhi. She won an Academy Award for Best Costume Design for her Gandhi designs.

In 2012, Athaiya was diagnosed with a form of brain cancer and left her paralyzed. She died from problems caused by the disease on 15 October 2020 at a Mumbai hospital, aged 91.

All content from Kiddle encyclopedia articles (including the article images and facts) can be freely used under Attribution-ShareAlike license, unless stated otherwise. Cite this article:
Bhanu Athaiya Facts for Kids. Kiddle Encyclopedia.