Big Spring is one of the largest springs in the United States and the world. An enormous first magnitude spring, it rises at the base of a bluff on the west side of the Current River valley in the Missouri Ozarks. Located about four miles downstream from Van Buren, it is within the boundaries of the Ozark National Scenic Riverways, and its visitor facilities are managed by the National Park Service. It is a contributing resource to Big Spring Historic District, listed on the National Register of Historic Places in 1981.

The average flow of 470 cubic feet (13,000 L) of water per second from Big Spring constitutes the second largest tributary of the Current River. The spring is by far the largest spring in the Ozark Plateau region. The only two springs in the Ozark region that approach the size of Big Spring are Greer Spring and Mammoth Spring. Maximum discharge of Big Spring must be estimated because backwater from the Current River makes accurate high water measurements impossible. The spring issues from the base of a limestone bluff, churning out aqua-blue water with great force, creating white caps, then quickly calming to a crystal clear channel. The spring water travels about 1,000 feet (300 m) where it adds itself to the Current River. The water is about 58 degrees Fahrenheit (13.3 °C), and the spring is surrounded by a well maintained park and a steep valley hillside covered in hardwood forest. Most of the known drainage basin encompasses northern areas of the Eleven Point River watershed. Big Spring is ever increasing in size, as the groundwater continues to dissolve limestone in a vast karst system, and continuation of stream capture in greater quantities. The spring is estimated to dissolve and remove 175 tons of limestone during an average day. The amounts of limestone dissolved and removed by the spring system in one year is estimated to equal a one-mile (1.6 km) long cave 30 feet (9.1 m) high 50 feet (15 m) wide, though that amount is dispersed among all parts of the karst system. 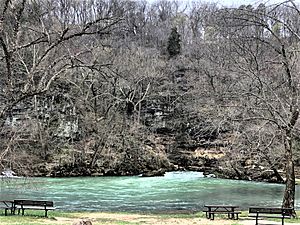 Big Spring rises at the base of a limestone bluff 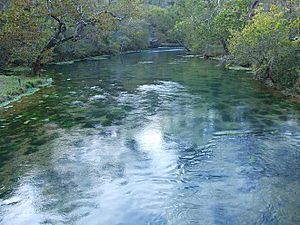 All content from Kiddle encyclopedia articles (including the article images and facts) can be freely used under Attribution-ShareAlike license, unless stated otherwise. Cite this article:
Big Spring (Missouri) Facts for Kids. Kiddle Encyclopedia.