Bigga is an uninhabited island in the Yell Sound between the Mainland and Yell in Shetland, Scotland. 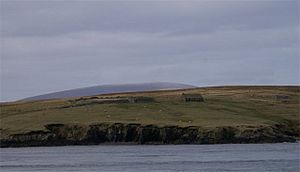 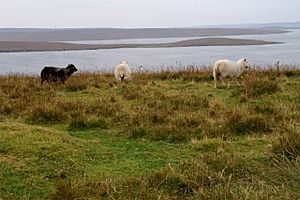 Sheep in south Yell, with Bigga behind

The island is split between the parishes of Delting, and Yell.

Bigga consists of Moine bedrock of coarsely-crystalline gneiss and quartzite.

It is thought that the name comes from the Old Norse bygdey meaning "island of the building", which may refer to an old structure.

In the southern part of the island, there is an old well, chapel and burial ground. There is a small prehistoric cairn in the north of the island. In the north is the remains of Norrabister, the island's "settlement".

The Pribislaw, a 160-year-old German sailing vessel ran aground here in 1870. She had been one of many sailing boats that took German emigrants from Hamburg to Victoria, in Australia, around the middle of the 19th century. Moved to Lerwick, she was used as a store and workshop until the 1950s. In 2005 the remaining timbers were excavated and transported to Whittlesea, Australia.

During World War II, two sailors from neighbouring Yell wanted to return to their native island to celebrate Yule (Christmas) during their shore leave. The weather was stormy and snowy and the usual ferry between the Mainland and Yell was not running, so they borrowed a friend's boat. Forced to land on Bigga, they sheltered in the bothy and danced, and played the fiddle in order to stay warm. They managed to reach Yell the next day.

All content from Kiddle encyclopedia articles (including the article images and facts) can be freely used under Attribution-ShareAlike license, unless stated otherwise. Cite this article:
Bigga, Shetland Facts for Kids. Kiddle Encyclopedia.